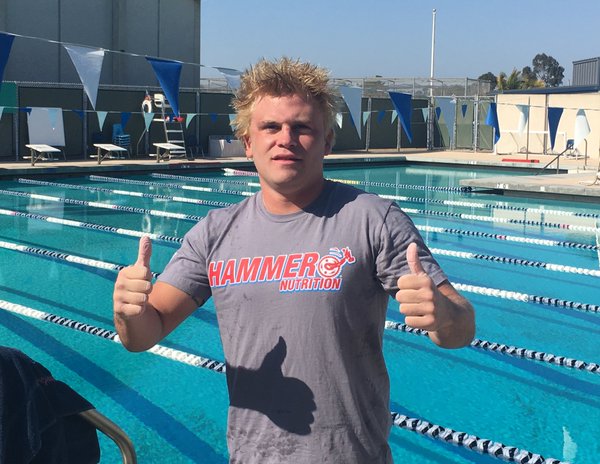 Swimming across the Catalina Channel – 21 miles from coast-to-coast – is difficult enough. Navy veteran and Mesa student Robert Palmese would know: last June, he became the 324th person to accomplish the feat.

This year, however, he’s aiming to make history. On August 11, Palmese will attempt to be the first person to cross the channel three times, an incredible 60+ mile swim that will take roughly 36 hours.

To raise money and prepare for his ambitious goal, Palmese took to Mesa College’s pool, where he swam for 12 straight hours. For reference, one swim across the Catalina Channel is approximately 693 laps.

Palmese has also been training with the Mesa College Swim Team and coaches Nathan Resch and Jim Fegan.

“Coach Resch at Mesa College was a huge part of my success in the pool and the ocean,” Palmese explains on his website. “He didn't even know about my plans to do the channel swim until just before the end of the season. With just a couple months left for training, he was onboard right away.”

Only four other people have made triple channel crossings, all four of which having occurred in the English Channel.

With all of his swims, Palmese also raises money for and promotes awareness for those suffering from Cystic Fibrosis. His first swim across the Catalina Channel memorialized Emily Noelle Nichols, a friend of Palmese’s who passed away from the disease in early 2015.

Find out more about Palmese and his upcoming challenge at his website, www.robertpalmese.com.