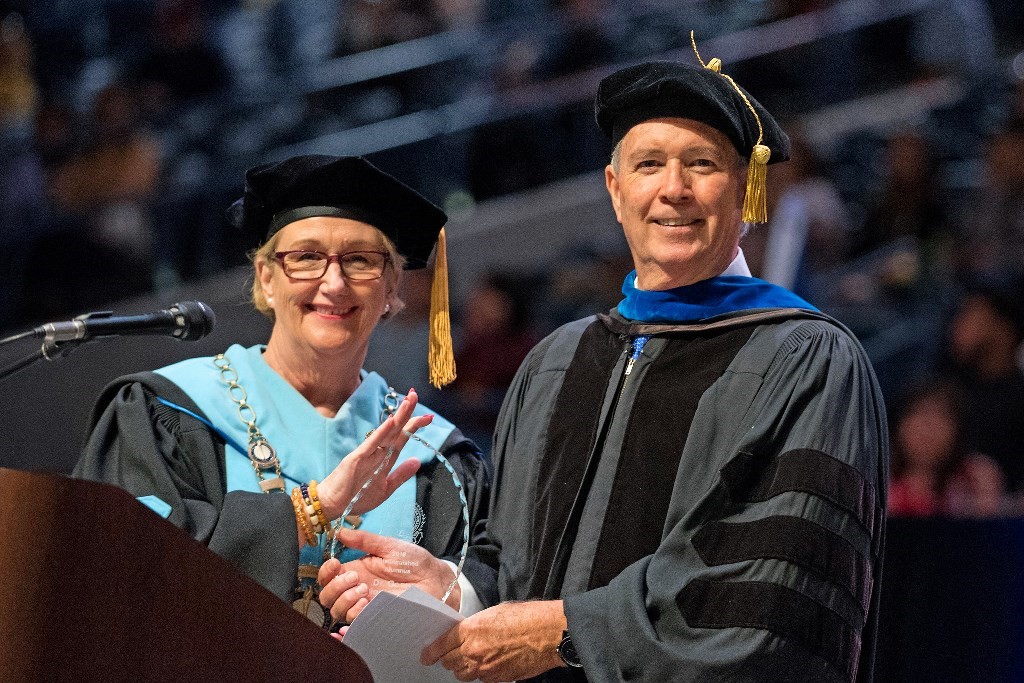 He is an award-winning scholar who has published over forty books, journal articles and book chapters. His primary areas of research concern political issues of the 1960s and the cultural legacy of American involvement in Vietnam. 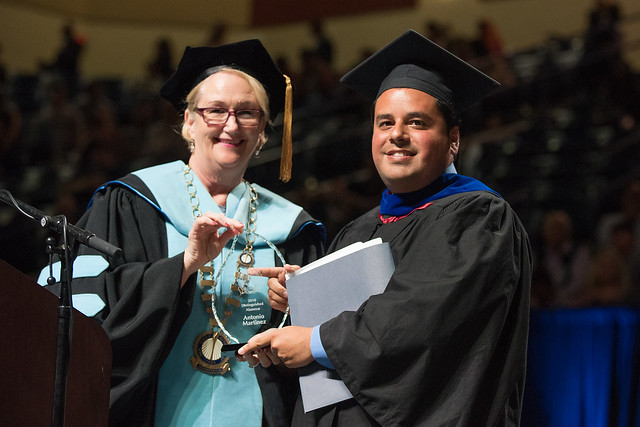 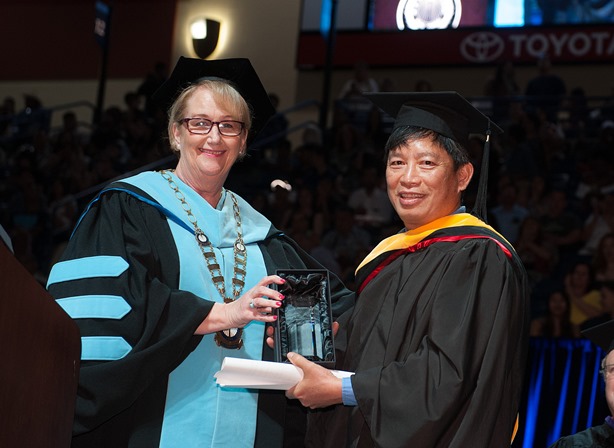 Alexander Szeto graduated from Mesa College in 1982 with an Associate Degree in Math, and then transferred to California State Polytechnic University Pomona where he earned Bachelor of Science in Aerospace Engineering in 1985. At San Diego State University, he earned a Master of Science in Aerospace Engineering in 1991. He is currently working as a systems engineer manager at Northrop Grumman – where he has worked for the past 22 years. In early 2017, Mesa College alumnus Alexander Szeto sponsored the “2017 Scholarship Challenge”, where he generously matched donations up to $10,000 that Mesa College received towards scholarships between April 17—May 17, 2017. The Challenge raised over $26,000 for Mesa. He currently serves on the Board of the San Diego Mesa College Foundation.

A nationally recognized arts educator and San Diego native, Rory Pullens graduated from Mesa College in the mid- ‘70s with a degree in Journalism. He went on to attain degrees in Film/Media, Theatre, and English, and a master’s in Educational Administration and Speech Communications from Loma Linda University in Riverside – laying the groundwork for his career in education and entertainment.

Pullens has spent nearly twenty years as an arts teacher and administrator, leading the design of the first elementary arts school in the Denver Public Schools and serving as Chief Executive Officer/Head of School at the nationally renowned Duke Ellington School of the Arts in Washington DC, where his inner-city urban students boasted annual graduation rates of 98%, college acceptance rates of 95%, and performed regularly for the Obama administration. From 2014 to 2018, Pullens served as Executive Director of Arts Education for the Los Angeles Unified School District, where he focused on increasing access and equity in the arts. 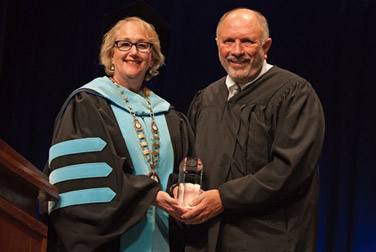 Anthony J. "Tony" Battaglia is a federal judge for the United States District Court for the Southern District of California. He joined the court in 2011 after a nomination from President Barack Obama and receiving a unanimous rating of “Well Qualified.” Prior to this position, he served as a federal magistrate judge for the same district court. Judge Battaglia studied at San Diego Mesa College in the late 1960s and went on to receive a B.A. from United States International University in 1971, and his J.D. from the California Western School of Law in 1974. In 1993, Battaglia was appointed a magistrate judge in San Diego, with reappointments in 2001 and 2009. Before joining the bench, Battaglia was a lawyer in private practice. He has also served as president of the Federal Magistrate Judges Association (2008) and as president of the San Diego County Bar Association (1992).  He now lives in Scripps Ranch with his wife and spends his spare time at his childhood hobby of surfing the local beaches. 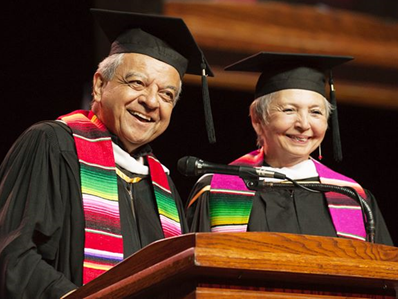 For more than 50 years, graduates Carlos and Linda LeGerrette (Class of 1969) have been committed to service, equality, education, and social justice. Linda, 67, is a graduate of Madison High School; her family here goes back five generations. Carlos, 70, graduated from Point Loma High School; he is a fourth-generation San Diegan. In March, the LeGerrettes were honored with the U-T San Diego Latino Champions Lifetime Achievement Award.

As students at Mesa College in the mid-1960s, the young couple was inspired primarily by Professor Gracia Molina de Pick, and started a student club that would later become MEChA. Inspired by Molina de Pick, they attended a meeting of the local support group of the Delano grape strike, and their life’s path was sealed. While still students the LeGerrettes joined Cesar Chavez in fighting for the rights of farmworkers. They worked closely with Chavez for several years, and later continued to work on democratic causes, including Jerry Brown’s gubernatorial and presidential campaigns.

Receiving a call from merchandising magnate (Price Club) Sol Price, they began working with Price on community and educational projects. Price convinced the LeGerrette’s they should become entrepreneurs and birthed the warehouse delivery program they would sell to Price Club (now Costco) in 1991. Today, the delivery service is still provided by Costco and employs hundreds of workers.

Inspired to engage the next generation in civic participation, in 2001, they founded the Cesar Chavez Service Clubs. The members, called “Chavistas,” learn civic responsibility and leadership founded on values Cesar Chavez promoted The organization has grown from a single club at one school to 38 clubs in 17 schools representing over 1000 Chavistas in San Diego Unified School District.

They have remained involved with Mesa College, and its Chicana/o Studies Department, and they have returned as speakers on several occasions. During their comments at Mesa College’s 50 th  commencement exercises in 2014, the LeGerrettes called for the students to take action and follow their dreams. In his closing remarks, Carlos LeGerrette asked a question of the graduates, “Se puede?” or, can you do it? The students answered with the familiar rallying cry, "¡Sí Se Puede!"… We can do it! 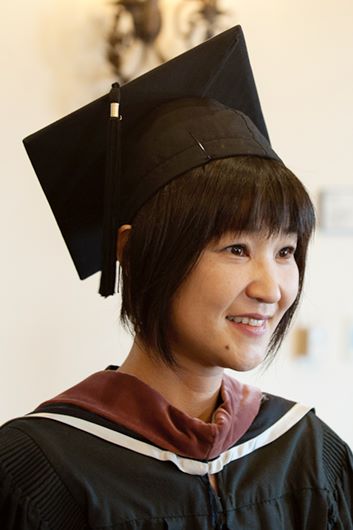 San Diego artist Miya Hannan grew up in her native Japan. There, she received a medical technology degree and worked as a hospital professional for seven years. In 1999, at age 30, she came to the United States.
She enrolled at San Diego Mesa College looking to find her passion and a new career. It was at Mesa that she found a way to express herself through visual art. She graduated with honors from Mesa in 2001 with an associate’s of Fine Art. Miya went on to earn a B.A. Summa Cum Laude from SDSU in 2004, and received an MFA with Fellowship from San Francisco Art Institute in 2007.

As an artist, Miya works on installation, sculpture, and paintings. Her artwork shows her view of the world constructed by the layers and linkages of human lives. Her work is influenced by Asian rituals and philosophy, as well as by her scientific education. Her goal is to present the structure of the world as a conjoined totality, evoking a spiritual quality beyond materiality.

Since her first student exhibition in 2000 at Mesa College Art Gallery, Miya has actively exhibited her work in San Diego, Los Angeles, San Francisco, Sonoma, and New Mexico. She was also commissioned by event organizer TEDxSanDiego to create an installation for their 2012 meeting.

Miya is represented by R.B. Stevenson Gallery in La Jolla, which this spring featured her solo exhibition “Layers and Missing Links.” She also teaches art at the University of San Diego and Grossmont College.

Arnie Robinson began his track career as a stand-out athlete at Morse High School, In 1967, he enrolled at San Diego Mesa College, where he set school records in the long jump, high jump, and triple jump for track and field. After graduation from Mesa, Arnie earned a scholarship to SDSU, where he won the 1970 NCAA long jump champion title.

The long-jump champion achieved even greater fame in his post-college years. A winner of the 1972 and 1976 Olympic Trials long jump, Arnie Robinson was third at the 1972 Olympic Games, and took the gold medal in 1976. He was the 1971 Pan American Games champion and was second in 1975. A veteran of 10 international competitions, Robinson was also the first World Cup long jump champion in 1977. Overall, he won seven national long jump titles, six of them outdoors. From 1976 to 1978, he was the top-ranked long jumper in the world with a career best of 27' 4 3/4" in 1976. He retired after the 1979 season, returning to coach at Mesa College.

During his 25 years as head coach at Mesa, Coach Robinson’s teams won 15 conference championships, 10 regional championships appearances, and two state championship appearances with one state title. He also coached six state champion student-athletes, with one competing in the Olympic trials and another, Felix Sanchez, winning a gold medal in Athens for the 400-meter hurdles.

The recipient of San Diego Mesa College's first Distinguished Alumni Award is film producer Raul L. Celaya. A native Californian born to Mexican parents, Raul, 36, grew up in El Centro. After graduating high school, Raul enrolled at Mesa College, where he studied architecture, film and theatre. He joined the Mesa College Theatre Company in 1994 where he learned all facets of theatre production, and winning awards for excellence in direction. Raul received two degrees from Mesa, an AA in Liberal Arts in spring 1996, and an AA in Dramatic Art the following year. The career technical degree gave him the qualifications to pursue his craft. From Mesa, Raul went to New York to become a technical director and lighting designer for off-Broadway shows. He then transitioned to film, where his experience and dedication led him to Los Angeles to work in film production. His bi-coastal status developed a dynamic list of credits including the MTV Video Music Awards, Nutty Professor II, Duplex, Big Fat Liar, Catch Me If You Can, and Along Came Polly to name a few. Raul is also a member of the prestigious Directors Guild of America.