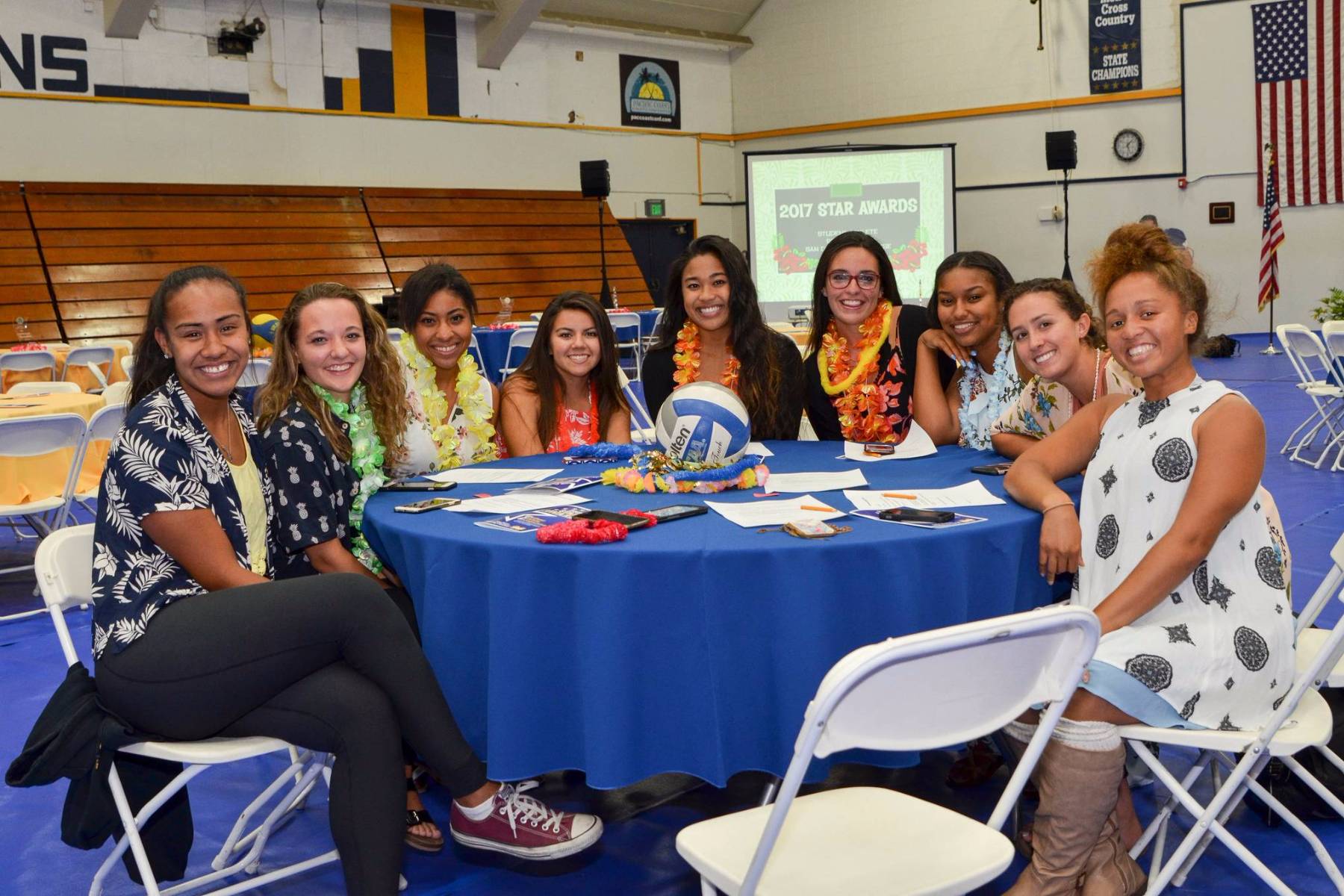 For a full decade, San Diego Mesa College has been honoring Olympian student-athletes for their hard work on the fields, pools and courts, as well as in the classrooms and community.  The tradition continued during a STAR (STudent Athlete Recognition) Awards ceremony and luncheon on Tuesday, May 9.

“It is really important that people at all levels support what you do and really honor the work that you do as student athletes, whether it’s on the field, on the sand, in the pool or wherever you might do your athletic competitions,” said President Pamela T. Luster, Ed.D. “I would also like to thank all of your coaches – your coaches are amazing people who give a lot of their time.”

The STAR Awards was created by Counselor Kristy Carson 10 years ago as a way to honor the athletes and create a greater sense of community on campus for the students participating in Mesa’s 21 intercollegiate sports teams.

“When I came here 11 years ago, there was no ‘campus life’ when it came to athletics,” Carson said. “Our athletes excel on the fields, courts and in the pools, but they also do really well in the classroom and in the community. STAR Awards stemmed from an idea and then having the support on campus to support our athletes and celebrate and highlight their academic achievements and community spirit, and recognizing that they’re ambassadors for this campus.” 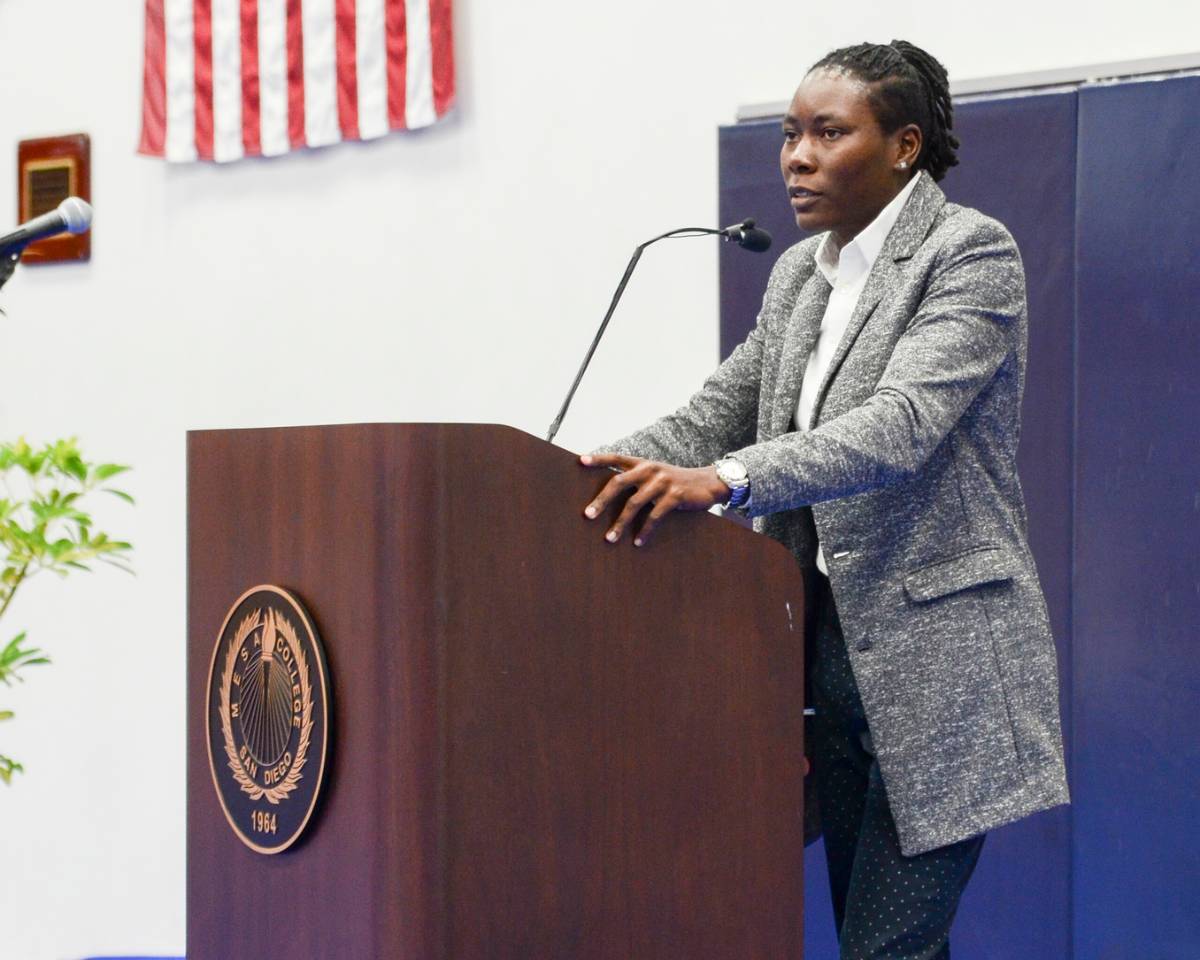 Brittney Reese – Mesa track and field coach and gold medalist from the 2012 London Olympic Games and silver medalist from the 2016 Rio de Janeiro Olympics – was the keynote speaker for this year’s STAR Awards. During her speech, she shared a personal anecdote about coming in second place during the 2016 Summer Games, and what she learned from it.

“I am going to lose sometimes, but it is mainly about how you move forward from that,” Reese said. “This year, I have been pushing myself to be a little bit more of an outspoken coach to get my athletes to where they want to be. If you’re not willing to learn, then no one can help you.” 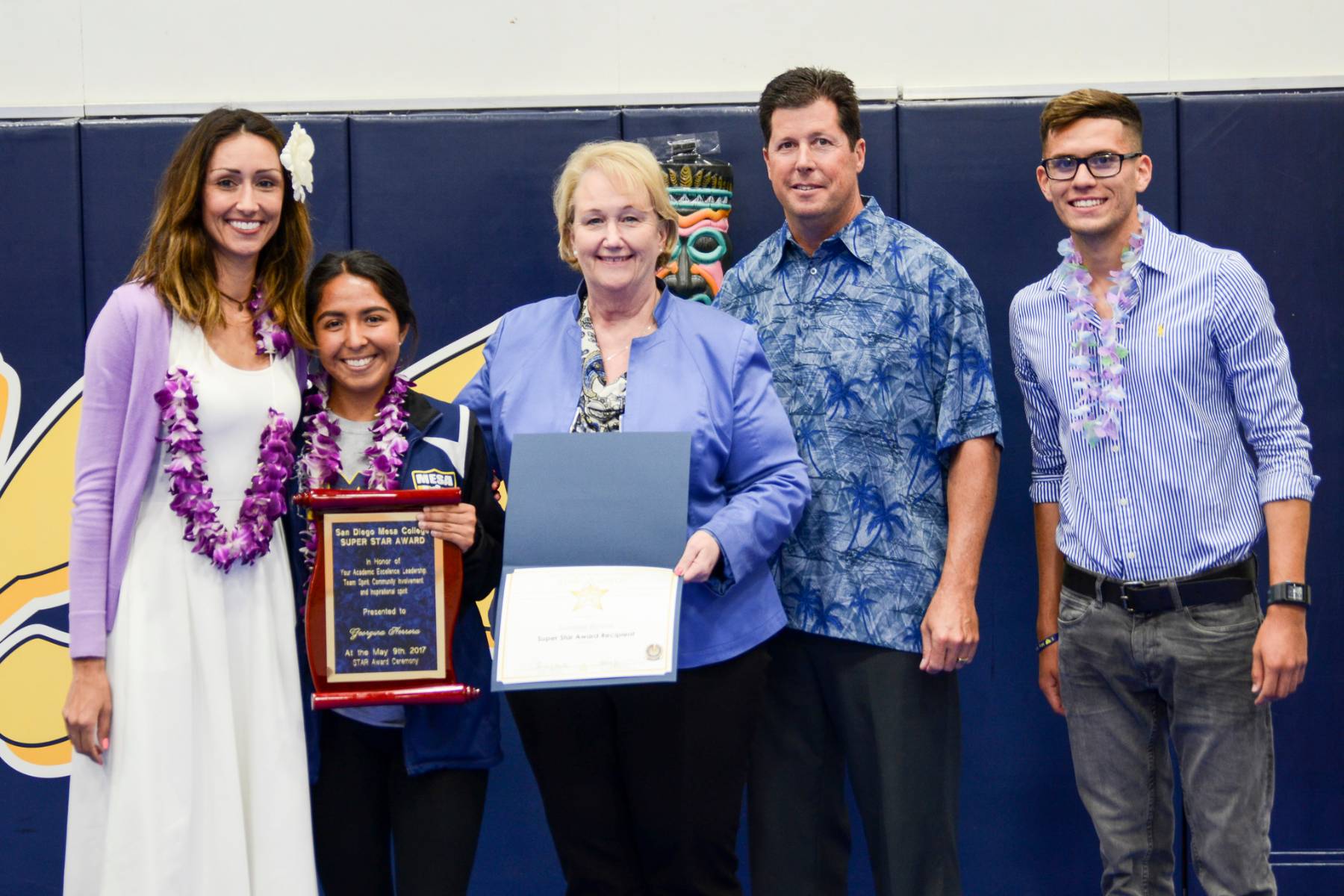 This year’s SuperSTAR Award went to accounting major Georgina Herrera from the Women’s Soccer team, who was named as the Pacific Coast Athletic Conference Female Athlete of the Year. Her accolades from her time as a student and soccer player at Mesa College also include being chosen for the National Soccer Coaches Association of America Junior College Women’s Scholar All-American First team with a GPA of 3.86.

“Herrera has the ability to play any position, and play it well,” Carson said. “In addition to her success on the field and in the classroom, Herrera volunteers in her community as a medical translator to the Tijuana homeless. Coaches and teammates agree that she is genuine in all of her efforts on and off the field.”

The Individual GPA winners this year were Bryan Moser (Men’s Swimming and Diving), Mong Ng (Men’s Cross Country, Track & Field) and Leah Veleker (Women’s Basketball), all of whom earned a 4.0 GPA during the Spring and Fall 2016 semesters. The Individual Community Spirit Award went to Veleker.

Jan Ellis – former Department Chair for Physical Education, Dance and Athletics and dance professor – was named as the 2017 STAR Awards Honoree posthumously during the awards luncheon. The STAR Awards committee had wanted to honor Ellis during the 2016 ceremony, but Ellis declined the offer at the time due to health complications related to cancer.

At the time, Carson told Ellis that no matter what, the committee would be honoring her during the 2017 ceremony, she said. Ellis’ family was present during the ceremony to accept the award on her behalf, and a plaque in her honor was installed in the new Exercise Science Center on campus. 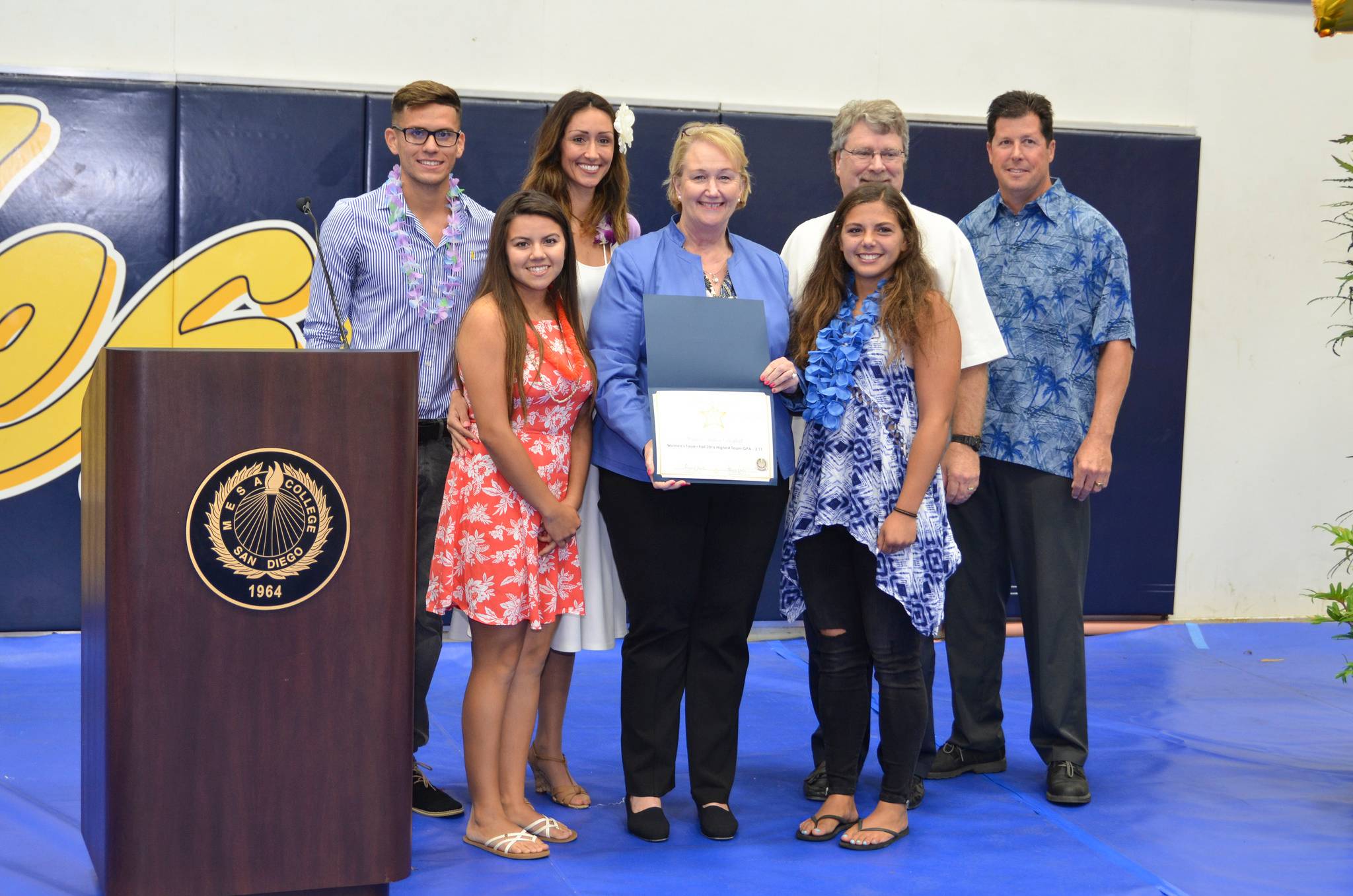 “It’s touching every time we get to remember Jan and what she meant to our school and our dance department,” said Kevin Hazlett, Acting Dean of Exercise Science, Health Education, Dance and Athletics. “As you enter into the building next door, there were many years where our students and our athletes didn’t have a facility this nice. It didn’t have the same impact on our athletes from a recruiting standpoint. Jan was committed to making sure this building was exactly what it turned out to be.”

Ellis began teaching as an adjunct professor in 1980 and continued to teach at Mesa College until her passing last August. 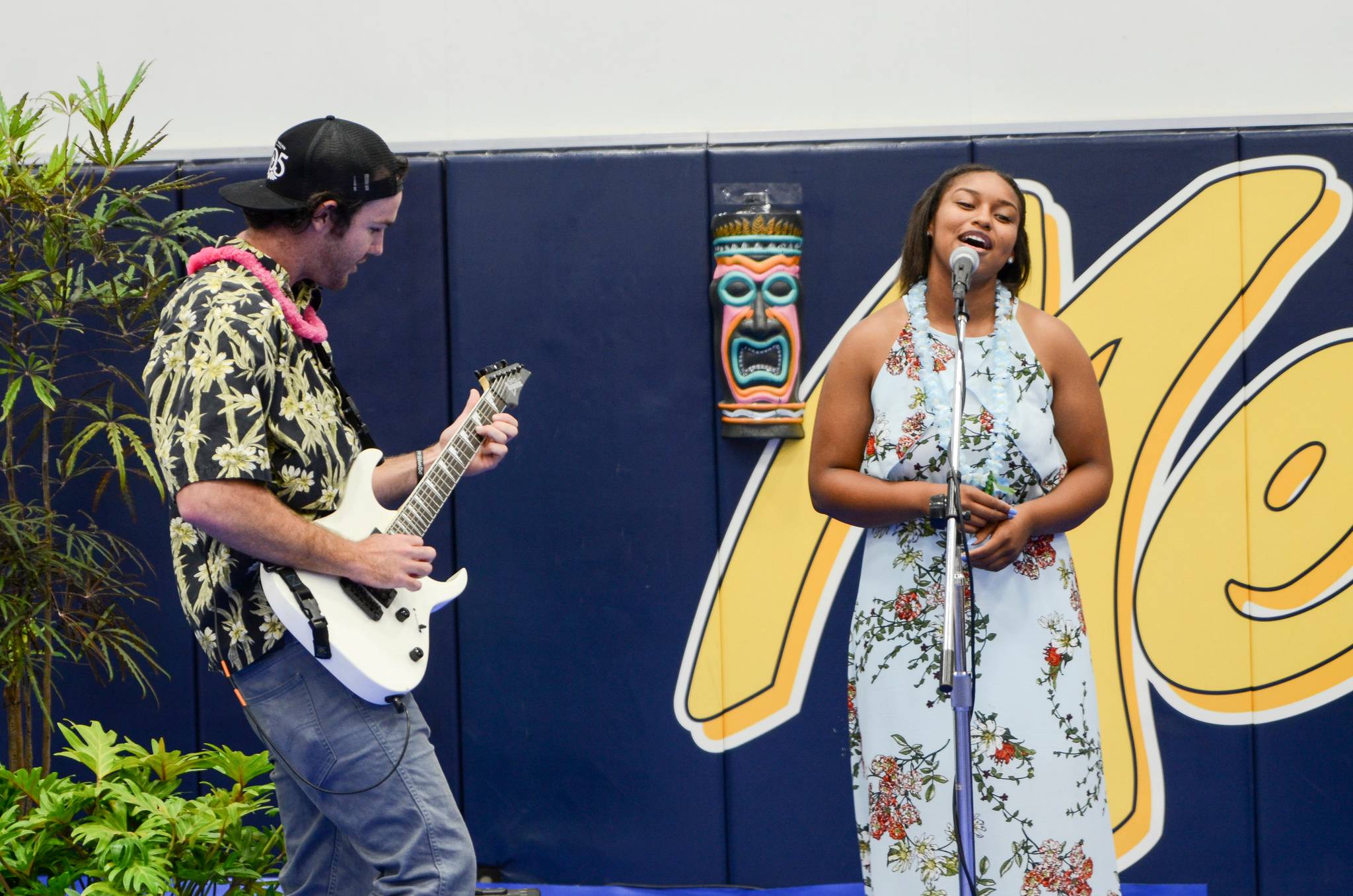