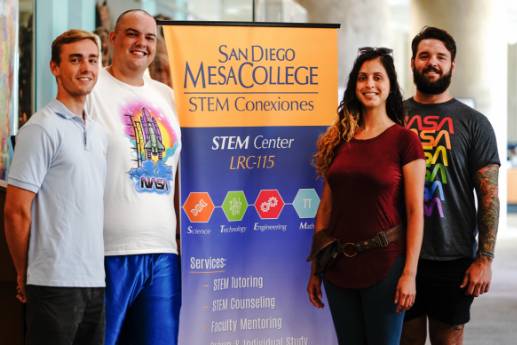 Four San Diego Mesa College students, Alexander Beltzer-Sweeney, Ana Parra, Rob Ronayne and Alex Hewett, have been selected to participate in the National Community College Aerospace Scholars (NCAS) program. The National Community College Aerospace Scholars, or NCAS, program is an educational experience for community college students interested in exploring careers in science, technology, engineering and mathematics. The program provides selected students with a four-day, in-person learning experience at a NASA center. NCAS gives community college STEM students an authentic NASA experience and encourages them to finish a 2-year degree or transfer to a 4-year university to pursue a NASA-related field or career. Acting Program Manager for the Title III HSI STEM Conexiones, Leticia Lopez, congratulated the four Mesa’s NASA Scholars and is certain that just like former winners (Naylynn Tanon and Shawn Cvetezar), these four students will keep this tradition going for many years to come, with  recruiting and mentoring new student award recipients. She told the four NCAS that the STEM Conexiones Program, faculty mentors and staff are ready to support them every step of the way. Beltzer-Sweeney, Parra, Ronayne and Hewett have experienced the support of the STEM Conexiones Program and the support of amazing faculty like Professor Irena Stojimirovic. Alexander Beltzer-Sweeney mentioned that since he came to Mesa College, he has been fortunate enough to work with faculty that have spent their time fostering a positive learning environment. While taking one of Professor Stojimirovic class, Beltzer-Sweeney remembers that it was by her introduction that he first met the Boyce Research Initiatives and Educational Foundation, where he spent the last two years conducting and publishing peer-reviewed binary star research at Mesa College. Parra has a bachelor's degree in Molecular Biology, but was inspired by the show “Cosmos” to pursue an interest in astronomy. She is also in the process of becoming a published Journal author. Hewett is in his first year of college and spends his days studying at the STEM Center.  He is a Physics major who encourages other students to get involved on campus as he says that this creates an environment of networking that you can’t get in class. Ronayne is a Peer Mentor in the STEM Center and was encouraged by Professor Stojimirovic and his peers to apply for the program. He hopes that this experience will open new career opportunities as he pursues to one day work for NASA. Aside from taking classes and becoming NCAS, these students are in the process of getting the Astronomy Club back together. Their mission is to develop a community for those interested in any aspect of astronomy. That can range from someone who is interested in learning about the stars and planets, to those who are interested in conducting research with the hope of continuing a career in the astronomy field.

How some mammals pause their pregnanciesAva M. Mason Promoting Inclusion in S.T.E.M. for San Diego Youth
Living in America but Dreaming of a Karen Homeland
Burundian Female Scientist Hopes To Eradicate Tuberculosis