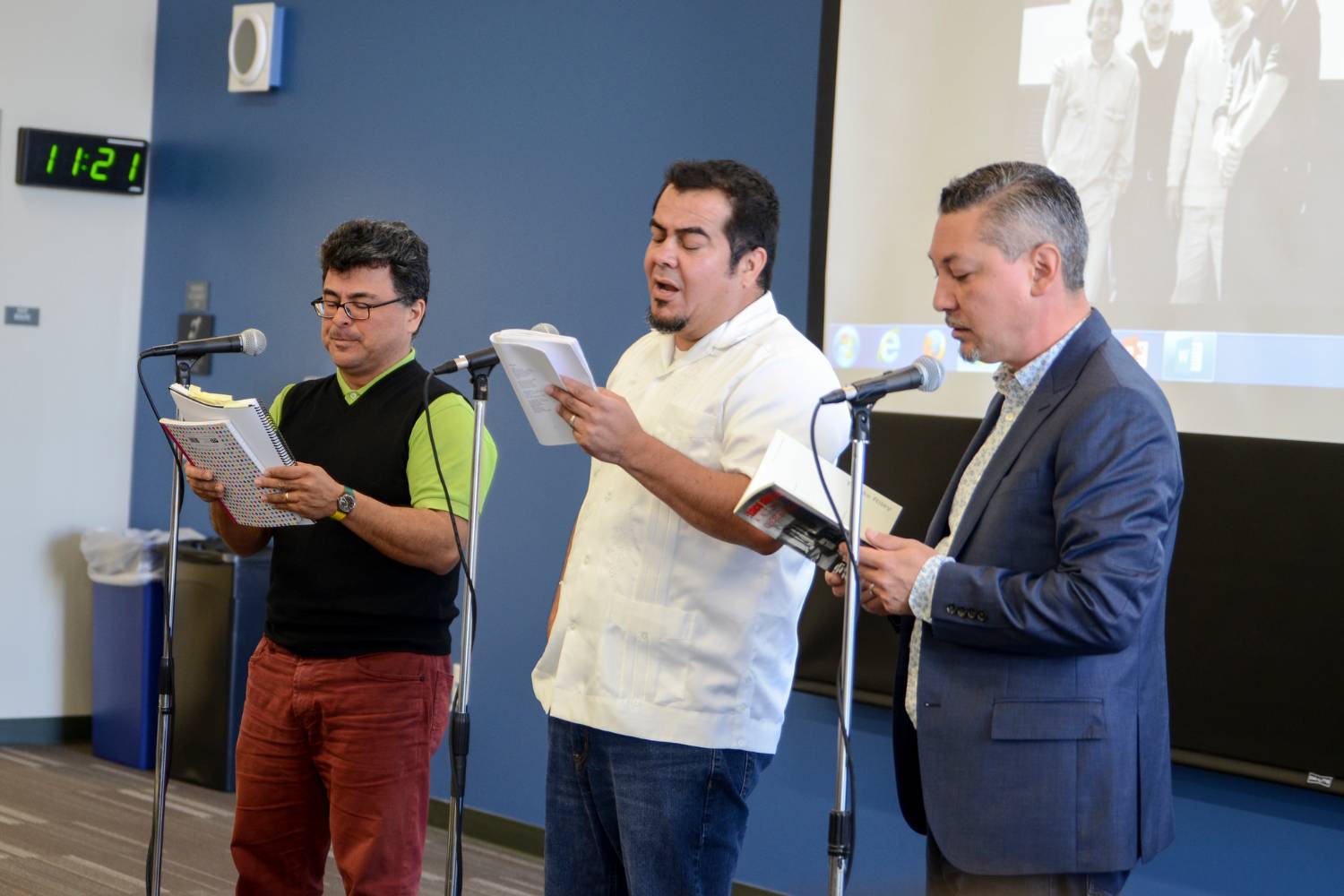 Tomás Riley, Adrian Arancibia and Adolfo Guzman-Lopez from the Latin spoken-word collective Taco Shop Poets performed and told the story of the formation of the group during a special reunion event at San Diego Mesa College on April 11.

Taco Shop Poets – “a group of artists devoted to creating community empowerment through the arts” – was originally founded in 1994 after a series of poetry reading where the performers took the arts out of the coffee shops and into the community taco shops.

“The Taco Shop Poets is a group that appeared in the mid-1990s here in San Diego when the Spoken Word Movement was really gaining strength across the nation,” said Manuel Velez, Chair of Chicana/o Studies. “Poetry slams and spoken word really began in the 1990s and late 1980s in the United States, it was a combination of a lot of different forms of creative expression – a combination of what we call cowboy poetry, hip hop, rap and jazz – it was a kind of fusion of lots of different styles.”

Known for their guerilla poetry style, as well as punk and hip hop influences, three of the Taco Shop Poets had a mini-reunion at Mesa College – reading together for the first time in years.

“This reading is very different than other readings that we’ve done because we’re not the same people that we were in the 90s when we were doing this a lot – when we were in our mid-20s and just out of college,” Guzman-Lopez said.

The trio opened with a simultaneous reading of three poems, set to a beat in a style reminiscent of both hip hop and jazz music. They continued by telling the story of how the group initially began as a way to bring the arts out of the seemingly elitist coffee shops, and into the taco shops to make it more accessible to the community.

After a successful series of Taco Shop Poetry readings in San Diego and Southern California, the group solidified and continued to perform together – eventually growing to more than 30 poets and band members.

For more information about the Chicana/o Latino Hertiage Celebration Committee and the Chicana/o Studies Department, contact Manuel Velez at (619) 388-2375 or mvelez@sdccd.edu.