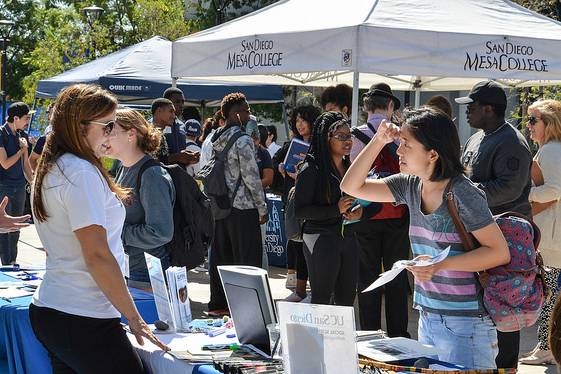 San Diego Mesa College students received information and advice about transferring to four-year colleges and universities during the Fall Transfer Fair on Oct. 4 at the Mesa Promenade. Representatives from more than 78 colleges attended the event, handed out pamphlets and gave out advice about transferring to their colleges to the approximately 1,638 students who attended the event throughout the day.

She added, as a benefit of transferring to SDSU, that “we are highly diverse – we offer programs for veterans, EOP, LGBTQ and commuter students, we have so much to offer.”

Lorena Malo, a recruiter for the Educational Opportunity Programs and Ethnic Affairs at SDSU, said that EOP can be a great information resource for students who are the first generation in their family to attend college. Established in 1969 as one of the results of the civil rights movement, EOP helps students in everything from learning the terminology associated with attending college to helping with applying for financial aid.

“It provides retention services to help them succeed with their journey through the university,” Malo said. “I can tell you from firsthand experience – I was an EOP student – that when I came into San Diego State, I had no clue what to do, what the terminology was – dropping, adding – I didn’t even know that you had to apply for financial aid every single year, so the second year I didn’t even apply and I didn’t get any financial aid.”

SDSU is certainly one of the most popular choices for transfers from Mesa College – its table during the fair consistently had a crowd gathered around it, and many students in attendance cited it as their first choice. One such student was communications major Blake Faris, who said that the course offerings in her major are strong and highly competitive when compared to programs at other colleges.

“They accept a lot of communications majors and they offer a lot of financial aid since its local, so financial is a big factor, too,” Faris stated as other reasons for wanting to attend SDSU.

In addition to local colleges, there were representatives available from schools throughout the state of California, the country and even one recruiter from an American college located in Rome. Kevin Tardif, representing John Cabot University, said that since the school is American, students are still eligible for financial aid, as well as scholarships.

“For us, it’s the appeal of going abroad – getting a more globally-oriented education,” Tardif said. “Have your passport – a lot of students don’t realize you need that – but for us at John Cabot, since we are a different kind of school, we get a different type of student that comes to us – we’re getting a student who’s a little more mature.”

Carlos Fernandez, an admissions and outreach counselor from California State University Sacramento, advises students to not just “go for the minimum” number of units required to transfer, but instead to “complete all general education units” before transferring.

Matthew Schellenberg, an admissions advisor from UC Merced, echoed the sentiment of focusing on major prep work before transferring to a four-year school. UC Merced is the most recently established UC campus, having opened in 2005. The school has 7,000 undergraduate and graduate students, making it the smallest of the nine UC campuses.

“We have great financial aid, we’re a smaller campus, we’re near Yosemite, and we’re the most (ethnically) diverse UC,” Schellinberg said.

The next transfer fair takes place Nov. 15 from 4 to 7 p.m. at the Mesa Promenade. For more information about transferring and transfer preparation, contact the Mesa Transfer Center via email at mesatransfer@sdccd.edu, via phone at (619) 388-2473 or by stopping by the Office in the Student Services Building at I4-306.