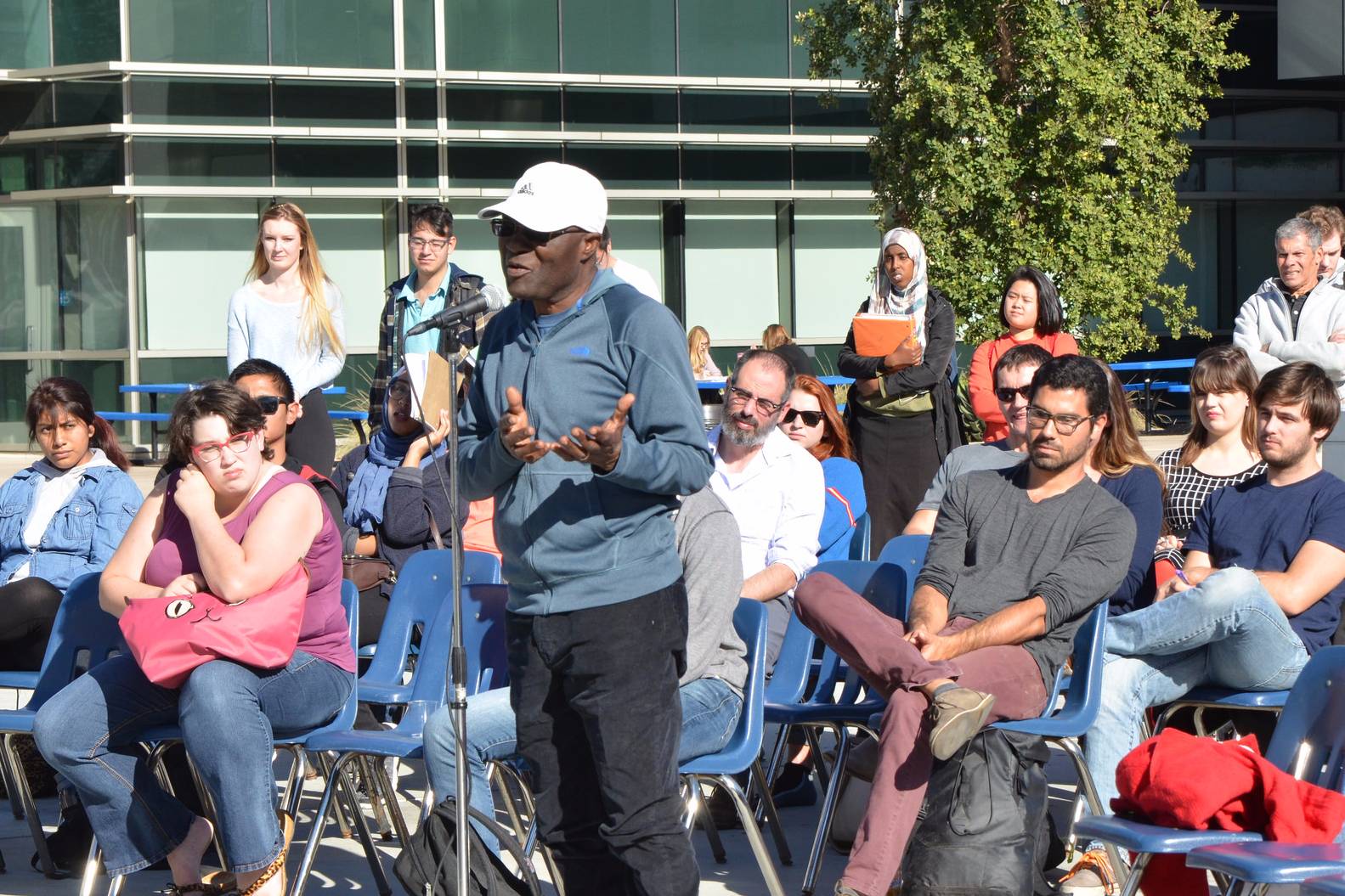 As a way to ease political tensions post-election, San Diego Mesa College faculty, staff and students participated in a Teach-in event in front of the LRC on Wednesday, Nov. 30.

With speeches from political science professor Carl Luna, sociology professor Evan Adelson, psychology professor Inna Kanevsky, AS President Ava Fakhrabadi and more, the event was an information session about the election and campus unity for those in attendance.

“I think it’s important that Mesa leads the way in discussions like this, not only for the sake of our students, faculty and administration, but as a model for our community to demonstrate the kind of dialogue and opportunities for activism that present themselves now,” said adjunct English professor Joe Safdie during the Teach-in.

Organized by Safdie, Chemistry professor and Academic Senate President Robert Fremland and Fakhrabadi, the Teach-in was attended by a couple hundred students, faculty and staff and helped to foster discussion between the campus community. Among the speakers, several faculty members offered information about the election process, their views of how politics has evolved over the years and ways to heal post-election.

Political Science professor Michelle Rodriguez explained how the Electoral College is selected and functions, while Kanevsky reminded the audience to be civil to others regardless of who they voted for on their ballots.

A particularly unique perspective during the Teach-in came from Dramatic Arts adjunct professor Shelton Deckelbaum, who proposed the idea that elections are akin to theatrical productions.

“Performance elements are incorporated into both mainstream politics as well as social and political activism,” Deckelbaum said. “When we go to the theatre or we see a movie, we experience the dramatization of a story…in this political season, we saw how the campaigns used language, imagery, staging, costume and music to tell the story that they hoped would win the election for their candidate.”

Blaming the currently polarized political climate in the United States on worldwide factors like climate change, globalization and military conflicts, Adelson said that he believes that the outcome of the election was not surprising given all the issues at hand.

“We see escalating warfare around the world – conflicts over natural resources and from intensified economic competition – as a result, Americans are suffering,” Adelson said. “America has higher poverty rates – especially childhood poverty rates – than any other affluent nation…We have higher infant mortality rates, we have the lowest union density…our life expectancy in general is not as long as the life expectancy of people in other affluent nations.”

Fremland said that the Teach-in will be followed up with additional events during the Spring semester, though a schedule of events is not yet available. For more information regarding the Teach-in, contact Fremland at rfremlan@sdccd.edu or via phone at (619) 388-2422.