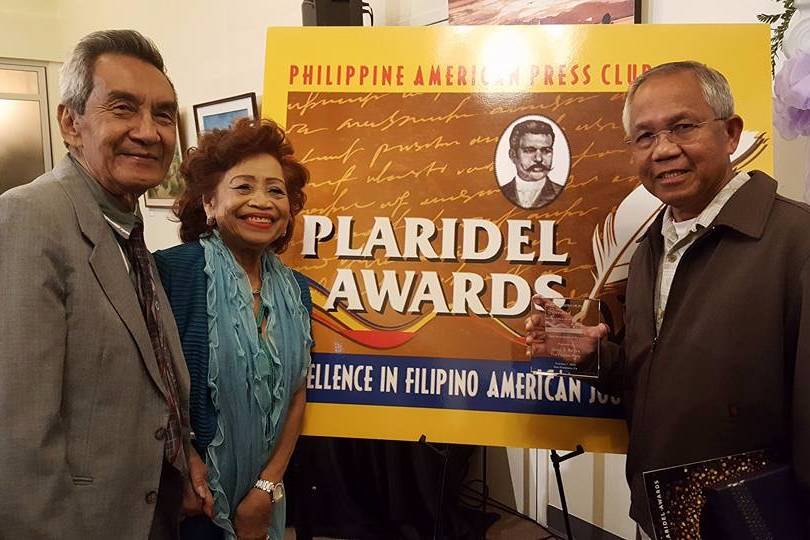 San Diego Mesa College stock clerk Jesse Reyes was presented with two awards from the Philippine American Press Club in San Francisco on Oct. 7 for his work as a writer at the San Diego-based Filipino Press.

The Plaridel Awards – presented by Consul General Henry Bensurto, Jr., an ambassador to the Philippines – honors journalists for the excellence of their work within the field of Filipino-American journalism.

During the PAPC awards ceremony, he was presented with an award in the category for “Best International News Reporting” for his article on the Czech involvement in the WWII Battle of Bataan. He also received an award for “Best Sports Story” for an article about late Philippine basketball player Carlos “Caloy” Loyzaga, and Reyes was a finalist in the category of “Best Commentary/Editorial Essay” for an editorial about the Filipino community helping Syrian refugees.

All three articles were written for his “Filipino Potpourri” column in local newspaper The Filipino Press, which was established in in 1986 and is based out of National City.

“The main purpose of the Filipino Press was to promote and establish a better understanding of the Filipino community here, at the same time to get them united and to get more attention to the community in their needs and other things they require as immigrants,” Reyes said.

Reyes has been an employee for the San Diego Community College District for 25 years, having begun his district career at Mesa before taking on various assignments at both San Diego City College and Miramar College before returning to Mesa in his current position.

He got his start as a writer while a high school editor-in-chief in the Philippines, where he won a gold medal for his editorial writing in a contest against writers from 220 other high schools. He went on to get a Bachelor’s of Science in Foreign Service from the University of the Philippines, and later earned an Associates of Arts in History from Mesa College in the mid-1990s.

His 24.5 year career as a sailor in the U.S. Navy began on a ship during the Vietnam War, where Reyes helped to start a newsletter that sailors on the ship could send home to family and friends.

He retired from the Navy as a Master Chief Petty Officer in 1990. Reyes later began writing for the Filipino Press, and has been writing on staff for almost 20 years now. It was The Filipino Press founder Ernie Flores Jr. – who Reyes refers to as the “dean of Filipino journalists in San Diego” – that encouraged him to start writing for his paper.

“He told me something that really got my attention – he told me ‘Jesse, you have a gift from God, a talent for writing, why don’t you use it?” Reyes said.

Before he retires, he aims to win a Pulitzer Prize for either his writing or editorial cartoons, and he said he feels this win has inspired him to do so.

“That would be the pinnacle of my success if I get the (Pulitzer Prize) before I retire from all of this public service,” Reyes said. “I feel exuberant, exhilarating and feeling like I have done something great and that I’ve made a difference in my own little way – these awards made me strive to achieve better things in my life.”

Carlota Vidrio, Senior Secretary for the Department of Humanities, expressed appreciation and excitement for Reyes in a campus-wide email.

“We are very excited for him – Jesse has been writing about community and civic events for much of his adult life and he has done so without being compensated,” Vidrio said. “He loves sharing human interest stories through the Filipino Press and has done so for many years.”