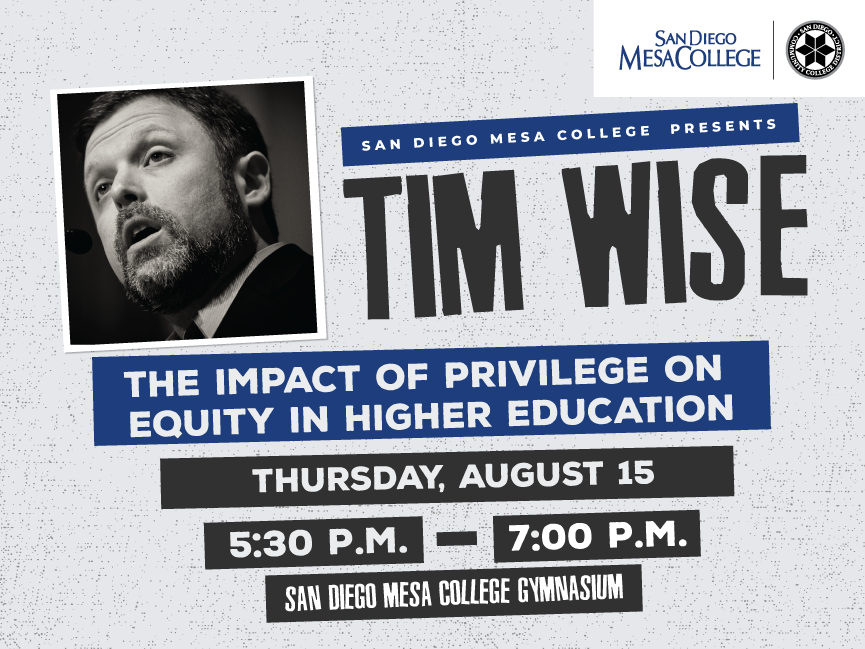 San Diego, CA. — Tomorrow, Thursday, August 15, 2019, San Diego Mesa College will host an event entitled "The Impact of Privilege on Equity in Higher Education", featuring speaker Tim Wise.   Mesa College is hosting this event as a testament to their commitment to access, success, and equity.  Mesa College is a diverse community of faculty, students, professional staff, and administrators who collaborate to foster scholarship, leadership, innovation, and excellence in an inclusive learning environment.  By promoting student learning and achievement that leads to degrees and certificates, transfer, workforce training, and lifelong learning, Mesa seeks to empower students to reach their educational goals and shape their future.

The event is open to the public, and members of the community are invited to attend. The goal of the event is to build and sustain a sense of community that extends across campus and constituencies, nurturing collaboration, learning, growth, and diversity that supports students.

Tim Wise is among the most prominent anti-racist writers and educators in the United States. He has spent the past 25 years speaking to audiences and community groups across the country, including at professional and academic conferences and at over 1,000 college and high school campuses. Mr. Wise has trained corporate, government, entertainment, media, law enforcement, military, and medical industry professionals on methods for dismantling racism in their institutions, and has provided anti-racism training to educators and administrators nationwide.

Wise is the author of seven books, including his latest, Under the Affluence: Shaming the Poor, Praising the Rich and Sacrificing the Future of America (City Lights Books). Other books include Dear White America: Letter to a New Minority (City Lights Books); his highly acclaimed memoir, White Like Me: Reflections on Race from a Privileged Son (recently updated and re-released by Soft Skull Press); Affirmative Action: Racial Preference in Black and White; Speaking Treason Fluently: Anti-Racist Reflections From an Angry White Male; Between Barack and a Hard Place: Racism and White Denial in the Age of Obama; and Colorblind: The Rise of Post-Racial Politics and the Retreat from Racial Equity.

Named one of “25 Visionaries Who are Changing Your World,” by Utne Reader, Wise has contributed chapters or essays to over 25 additional books and his writings are taught in colleges and universities across the nation. His essays have appeared on Alternet, Salon, Huffington Post, Counterpunch, The Root, Black Commentator, BK Nation and Z Magazine among other popular, professional and scholarly journals.

From 1999-2003, Wise was an advisor to the Fisk University Race Relations Institute, in Nashville, and in the early ’90s he was youth Coordinator and Associate Director of the Louisiana Coalition Against Racism and Nazism: the largest of the many groups organized for the purpose of defeating neo-Nazi political candidate, David Duke.

Wise has been featured in several documentaries, including the 2013 Media Education Foundation release, “White Like Me: Race, Racism and White Privilege in America.” The film, which he co-wrote and co-produced, has been called “A phenomenal educational tool in the struggle against racism,” and “One of the best films made on the unfinished quest for racial justice,” by Eduardo Bonilla-Silva of Duke University, and Robert Jensen of the University of Texas, respectively. He also appeared alongside legendary scholar and activist, Angela Davis, in the 2011 documentary, “Vocabulary of Change.” Wise appears regularly on CNN and MSNBC to discuss race issues and was featured in a 2007 segment on 20/20. He graduated from Tulane University in 1990 and received antiracism training from the People’s Institute for Survival and Beyond, in New Orleans.

Mesa’s vision is to be the leading college of equity and excellence, educating students to shape the future, and as such, members of the broader community are invited to attend the event.