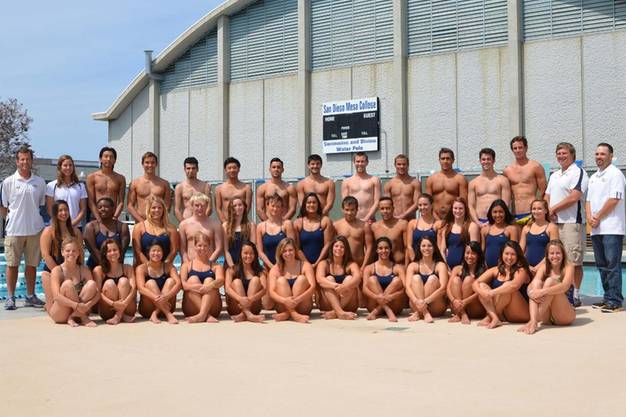 San Diego Mesa College’s swim and diving teams for both men and women are recruiting for the Spring 2017 competitive season, starting Jan. 3 with a month of cardio conditioning during Winter Intersession.

Exercise Science 126A, Cardio Conditioning I can be taken by anyone, but it is used as a pre-season training course for women and men on the swimming and diving teams. The intersession course, which includes both in-pool and dry land training, can be signed up for online using the CRN 69658 in Reg-e under the “Spring 2017” semester.

The swim and dive teams officially starts training for the season on Jan. 17 at 1 p.m. The team doesn’t hold official tryouts, but interested students can come on that day to swim and get feedback on their performance. Coach Fegan said that as long as someone has a background in swimming they can be accepted on the team.

“All of our competitions are open, the only meet that you have to be fast enough to qualify for is the state championship,” Fegan said.

The teams practice for two hours every afternoon and two mornings every week. In addition to experienced competitive swimmers, women’s coach Jim Fegan said that some students may have transferrable skills that can be used in swimming and diving – such as gymnastics being used in diving.

“If you have a competitive background, it’s a great opportunity to keep swimming,” Fegan said of joining the team. “There’s also the fitness advantage of staying in shape, it’s fun and reports show that being involved in athletics improves your GPA and your transfer rate.”

Also in last year’s championship, Mesa swimmer Neil Franka set both a national and state record for the 200-yard Individual Medley with a time of 1:47.36, earning him the title of Men’s Co-performance of the year, according to the California Community College Athletic Association website.