‘Soldiers Who Salsa’ Dancing Up a Storm at Mesa College 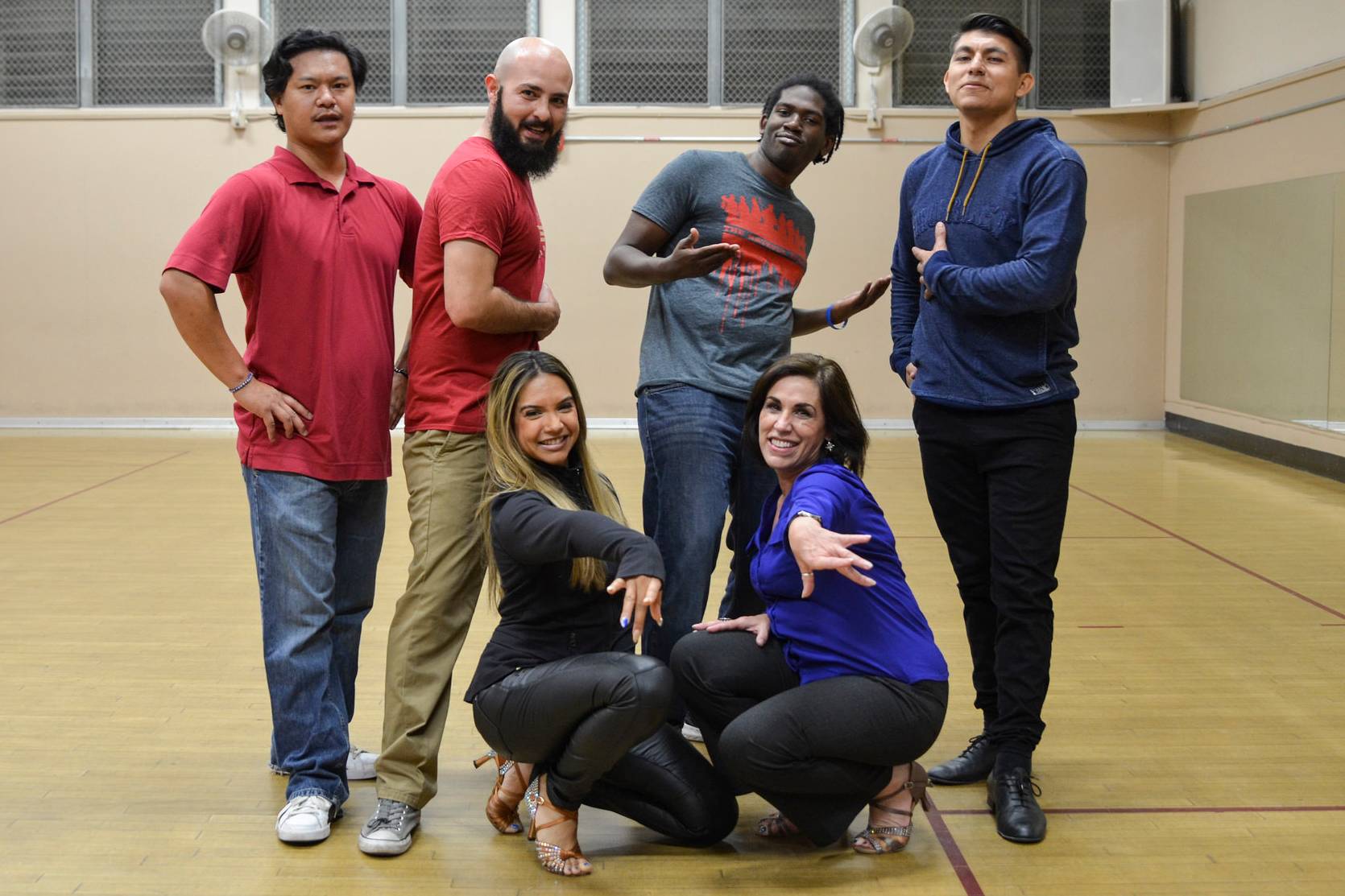 Student Veteran at San Diego Mesa College have been finding a new sense of community on campus this semester through free social dancing classes on campus.

Soldiers Who Salsa – a non-profit organization that brings salsa dancing lessons to veteran and active duty military personnel – has made its way to Mesa’s campus, and has been met with great enthusiasm.

Created as a way “to enhance and enrich the lives of wounded, ill and injured active duty and veteran service members of the U.S. Armed Forces and their families,” according to the SWS mission statement, the organization aims to help heal soldiers through the use of “therapeutic social dancing.”

“Being able to dance is a great way for your mind, body and soul to heal,” said Rebecca Lee, Adjunct Professor in Student Health Services at Mesa and a Licensed Marital and Family Therapist. “With salsa dancing, you partner with another person and it’s the idea of safe touching that is expected.”

Lee added that the “community aspect” helps to resolve the “feeling of isolation and displacement” that soldiers and veterans often experience upon returning from combat.

Making the program even more relevant, classes are taught every Wednesday at 5 p.m. by fellow Army veteran Serena Cuevas, a dancer who was made famous during her tenure on “Dancing with the Stars.” Cuevas – the owner, instructor and choreographer from Alacrity Fitness and Dance Academy in San Diego – is the 2012 Australian Latin Open Champion, and has been a finalist in the Puerto Rico World Salsa Open (2013), World Salsa Summit (2013) and World Latin Dance Cup (2011).

Student veteran Juan Ortiz, a psychology major at Mesa College, is responsible for bringing the Soldiers Who Salsa program to the campus. After participating in the classes at other schools and VA hospitals, he pitched the idea of bringing SWS to Mesa to the Veterans Advisory Committee for approval.

While he said that some students take the dance class as a fun way to break up a hectic week of studying and school, others receive the therapeutic benefits from salsa.

“Everybody gets something different out of it – some people do it because they’re extremely shy and they have trouble interacting with other people, which might be symptoms for those who suffer from Post-Traumatic Stress Disorder,” Ortiz said.

Cuevas and her assistant Jon Bada have already been able to cover multiple dance styles during the fall 2016 semester, including bachata, salsa and swing. For Ortiz, he said the SWS classes have been a way for him to reconnect with his South American culture.

“For me to absorb my culture, in one way, was through dancing, and I absolutely love it – I’m filling that gap in my life,” Ortiz said.

One of the veterans attending the weekly salsa classes, Student Veterans Organization President Jordan Miles Agricula, is a Marine Corps veteran and a communications studies major at Mesa College. He said that participation in the Soldiers Who Salsa program has helped him to get more involved with Mesa College’s veterans and build friendships on campus.

“By attending the lessons and dancing, I was able to not only provide a physical outlet through the exercise dance provides, but I was also able to learn how enjoyable it is to be side by side with other veterans and build relationships through dance,” Agricula said.

Salsa’s upbeat energy has helped many of the participating veterans to feel comfortable dancing, and according to Agricula, it is in large part due to the efforts of Bada and Cuevas.

“I really appreciate the attentiveness and skill of our coaches and all of my fellow dancers for bringing the energy, and giving me something to look forward to every week,” Agricula said.

“Grouping together a bunch of salty veterans with absolutely no dance skills in front of a mirror and having the shared experience of self-humiliation through learning is comforting,” Hardie said. “Much like military boot camp, when one struggles we all struggle but when one falls we all help pick them back up.”

Counseling Department Professor Ramiro Hernandez, who specializes on academic counseling for veterans, said that SWS not only helps to develop bonds between veterans, it also helps to connect veterans to the wider Mesa community.

“It has allowed student veterans to network with each other,” Hernandez said. “Dancing in general creates a positive ‘vibe’ – it has created opportunities to build healthy and positive relationships with other student veterans, and other people on campus. At the same time, it provides a physical outlet for the students and their stressors in life, stressors in schools that come every day, and this – at least once a week – gives them that outlet.”