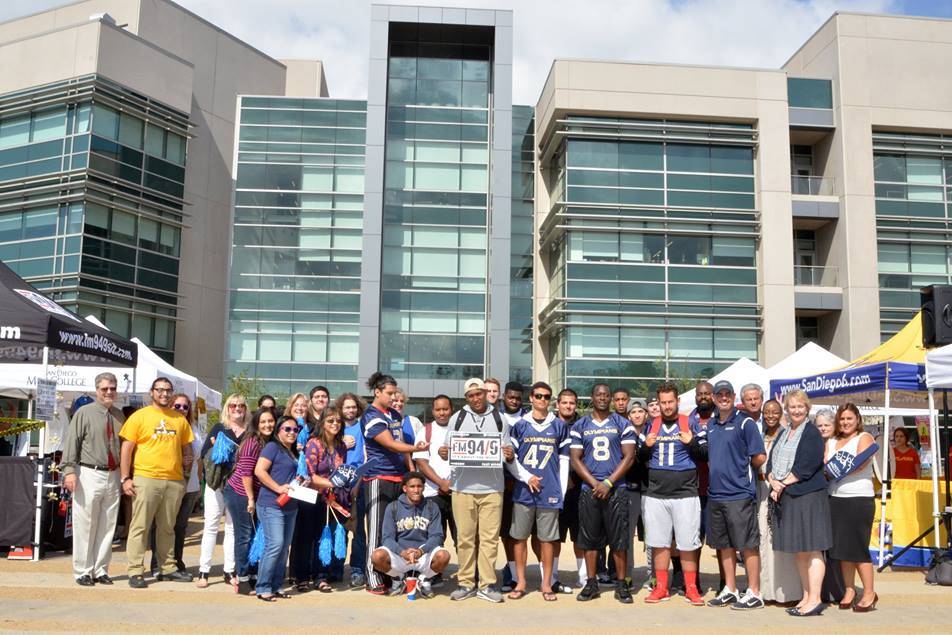 Spirit Week is taking over San Diego Mesa College campus this week, and as faculty, staff and students start to don their blue and gold, there are plenty of activities to celebrate with.

Festivities start off early in the week with the Spirit Week Office Decorating Contest, the goal of which is to feature the school’s Olympian pride and spirit to increase a sense of community for the students. This year, eight departments on campus will be competing to win an office pizza party, $50 Mesa Café gift card or a basket of office treats for first, second and third prize respectively. The contest will be judged on Wednesday, Oct. 12, with winners being announced Thursday during the pep rally.

“I am so impressed with Mesa College – we have so many different departments that are participating in the office decorating contest,” said Victoria Miller, Mesa’s dean of student affairs. “It’s to create festivity and spirit and to recognize that ‘We are Mesa,’ and we are able to express that by the decorations and spirit that we create in our offices.”

On Thursday the Spirit Week Pep Rally will take place in the Mesa Commons Quad from 12:30 to 1:30 p.m. Members of the football team will be there to meet students, as everyone enjoys DJ and live music, games, free popcorn, giveaways and an opportunity drawing.

Game day activities on Saturday, Oct. 15 begin as the Mesa College’s Associated Students welcomes students, faculty, staff and the community to join them for their free pre-party tailgate from 4 to 6 p.m.

“We’re trying to make this huge event for students to come to so that it’s a sense of community on campus, and it makes it not just a commuter school, but someplace where they actually want to come,” said AS President Ava Fakhrabadi. “Homecoming is an awesome thing at the beginning of the year to promote Mesa as a community.”

“AS has been planning and working really hard to create this social event that creates team spirit, community spirit and also gets our Mesa name out into the community,” Miller said.

After the tailgate party, Mesa’s football team will face off against San Bernadino Valley College at 6 p.m. on the field at Mesa’s Merrill Douglas Stadium. Battling for a playoff spot, Mesa’s 2-3 Olympians will play the 1-4 Wolverines in a tough conference match up. Tickets are $5 with a student ID and $7 for general admission.

The Mesa Foundation will be drawing the winner of their Pay it Forward Scholarship opportunity during the game’s halftime. Tickets are $5 a piece or five for $20, and can be purchased during the game or in the foundation office. The winning ticket holder can create a scholarship of their choice to be presented to a Mesa College student during the scholarship banquet April 28, 2017.

Mesa’s Homecoming Week is a relatively new tradition, having just begun during the fall semester of 2012. One of the many reasons why the event was started was to establish the campus as a full community where students can learn, have fun and make lifetime connections.

“School’s a lot easier when you have a support system, friends and fun, and I think that’s something that a lot of students on our campus don’t get,” Fakhrabadi said. “Once you actually get involved and you actually get to know people on campus, that’s when you start enjoying coming to school.”