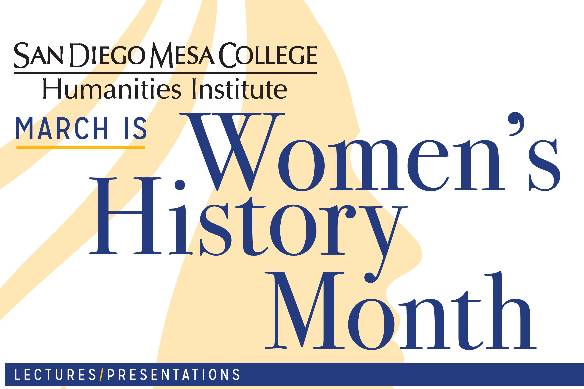 San Diego Mesa College will celebrate Women’s History Month with a full schedule of events during the month of March, starting with “Shrink Not From Incessant Error: The Uncomfortable Conversations of Margaret Fuller (1810-1850),” a talk on early American feminism with Jeff Austin on Friday, March 3 from 1 to 2:30 p.m. in LRC 435.

“In the political climate right now, especially, I think it’s important for a woman’s voice to be heard,” said Denise Rogers, Art History professor at Mesa College. “If you look historically at women’s rights, women’s issues, female empowerment, equality in pay and access to jobs, it’s something that women are still struggling with.”

Events throughout the month will focus on a variety of topics, including sex trafficking, domestic violence, women in sports and the battlefield during the Spanish Civil War and more.

The Sixth Annual Gracia Molina de Pick Feminist Lecture Series will take place on Wednesday, March 8 from 11 a.m. to 12:35 p.m. in MC 211 B. Guest speaker Dr. Maria Nieto Senour, Ph.D., President of the San Diego Community College District Board of Trustees, will speak about centering community, culture and social justice in education during this event presented by the Mesa College Chicana/o Studies Department.

Following the Women’s Marches around the world, some students have been looking to get more involved in politics and activism, Rogers said. As a way to hear from students and show ways to engage in civic involvement, one of the events for Women’s History Month is the “Get Your Voice Heard” event on Tuesday, March 14 from 9 a.m. to 2 p.m.

During this event, which is “dedicated to taking action,” students will learn about how they can use posters, art, postcards, phone calls, letters and emails to express their opinions to elected officials and the community at large.

“I think that if we don’t maintain the momentum, there could be legislation that is passed that goes backward rather than forwards,” Rogers said.

During the “Women Victims, Women Survivors” panel, attendees will hear from representatives of several local organizations that work with the victims and survivors of sex trafficking, human trafficking and labor exploitation, as well as one sex trafficking survivor.

Panelists from the Bilateral Safety Corridor Coalition, the Center for Community Solutions and the Center for Justice and Reconciliation will discuss this ongoing issue and let students, faculty and staff know how they can help end violence against women, children and migrant workers. This panel will take place on Thursday, March 9 from 11:10 a.m. to 12:45 p.m. in MC 211 A/B. 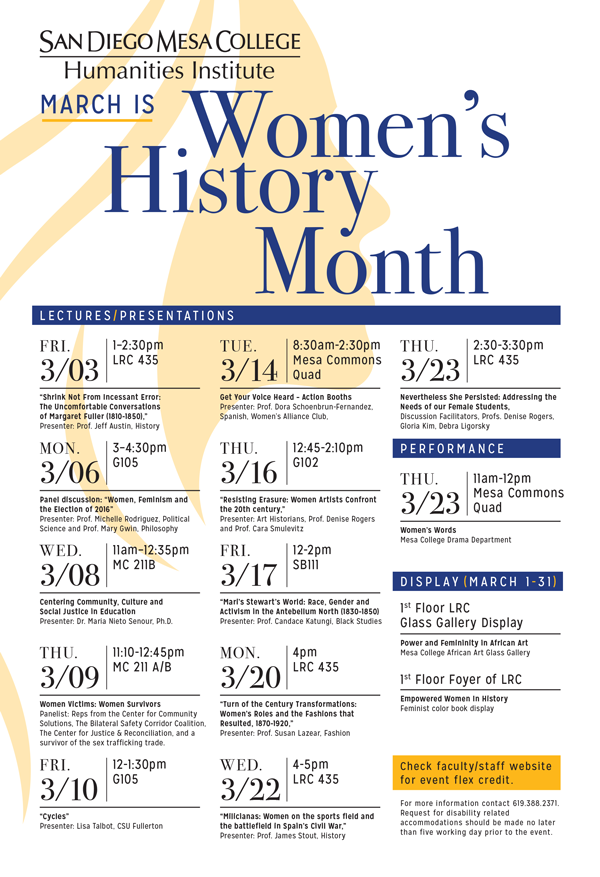