Fashion Gets Fresh as Mesa College Students 'Redux' the 1950s 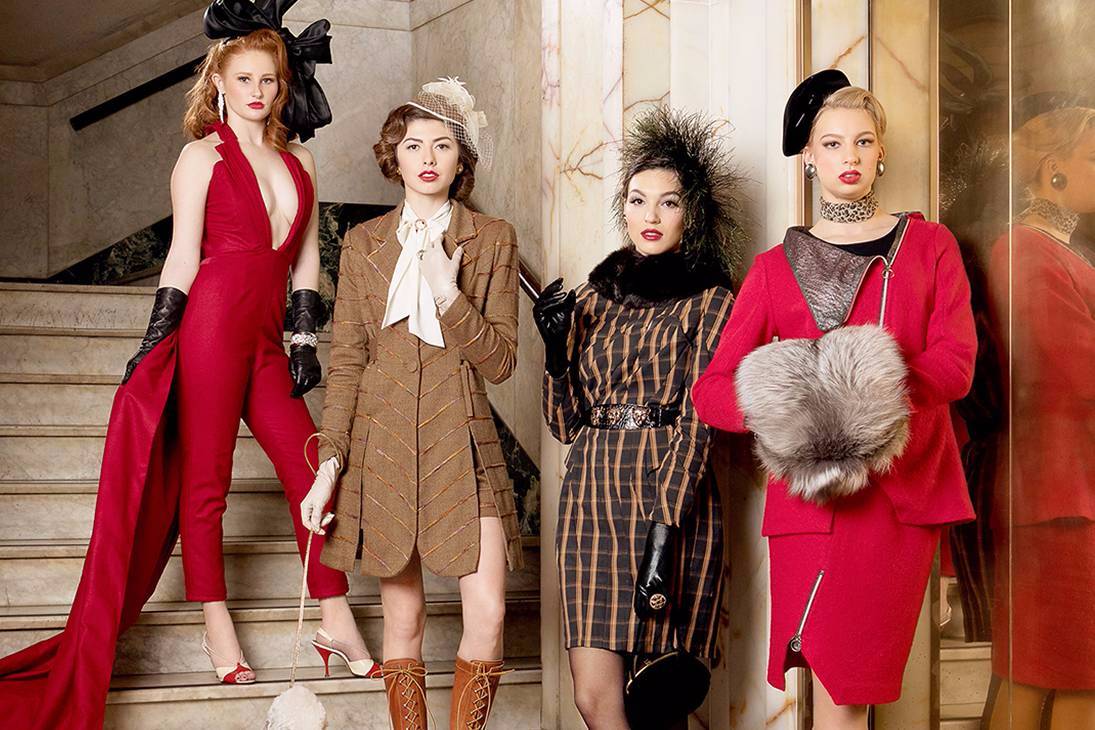 Designs created by San Diego Mesa College Fashion students and inspired by 1950s style will be in the spotlight during the 2017 Fashion Redux Finale Party at the San Diego History Center on Friday, March 3 at 6 p.m.

After visiting SDHC  during the fall 2016 semester to view vintage designs from the 1950s, students designed and put together garments to reflect a modern twist on the classic styles. Four students were then selected as finalists and awards will be given out during the finale party.

“With this event, the students get to work with a real historic garment as a source of inspiration so they see the tie of history to modern fashion,” said Susan Lazear, Mesa College Fashion professor. “The collaboration with an outside entity is always great for the students – and the experience of going through the competitive process is great as well because they try to do their best work.”

Lazear, along with History Ambassador Gabe Selak from the SDHC, will give a presentation during the event on 1950s fashion as it relates to the history of San Diego. Guests who attend the Finale Party are encouraged to dress in 1950s styles, and Mesa’s Fashion Club will sponsor a contest where the “Best Dressed” attendee will receive a gift certificate.

Though the student designs were inspired by two vintage outfits at the museum – a brown striped skirt suit and a red skirt suit – the four “Redux” outfits all have their own modern flair. 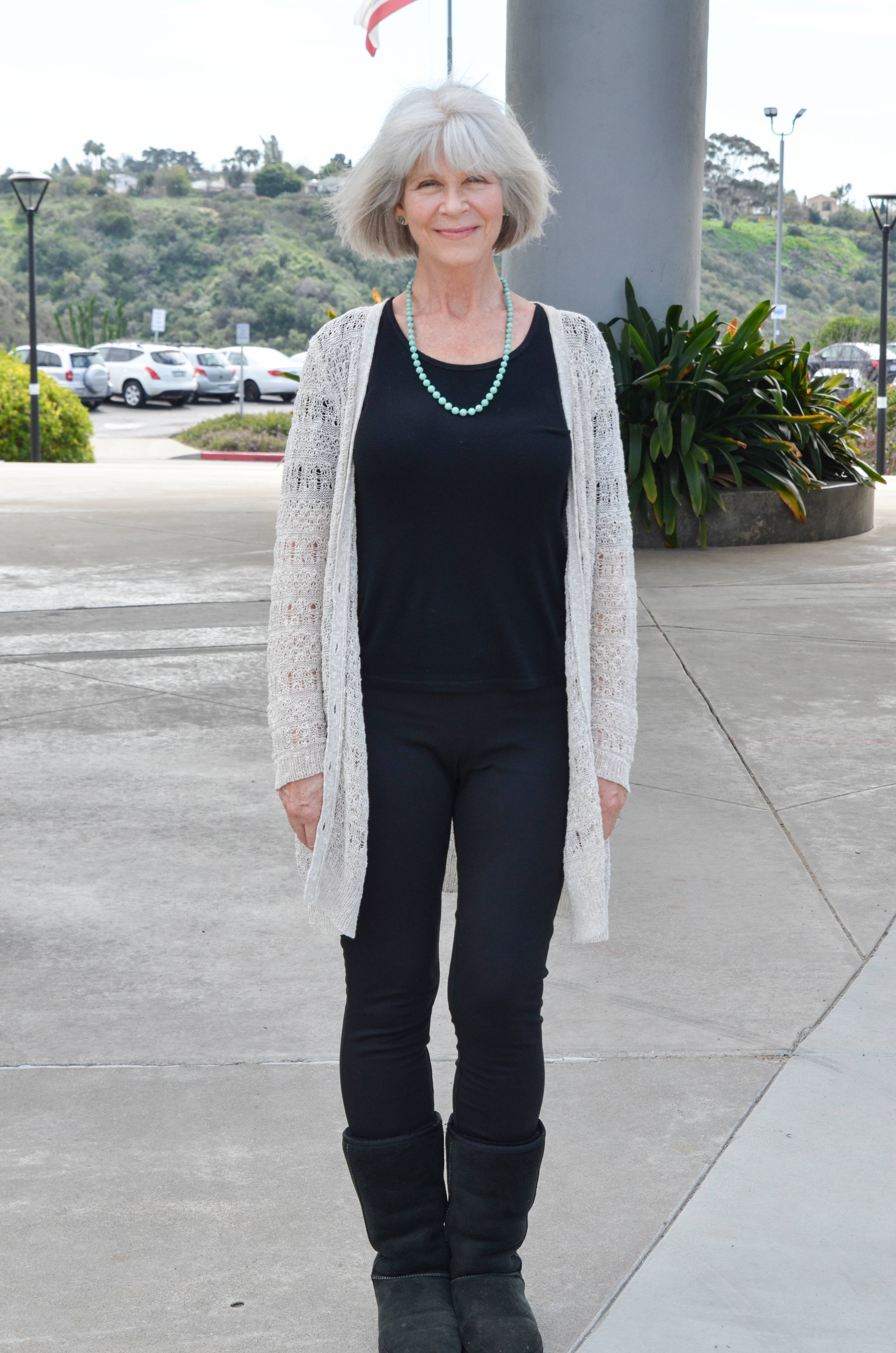 Student Rachel Merrill – who gained recognition last year from her fiber-optics dress for the Golden Scissors Fashion Show – drew her inspiration from the red suit dress. Her use of asymmetrical zippers in both the jack and skirt helps to modernize her interpretation, but it maintains its classic look with the fur muff.

“I remember my teachers in kindergarten wearing these sorts of suits, so it was a little bit nostalgic,” Merrill said. “I thought it would be cool to make a red wool boucle suit that I could wear – one that would be modern and that I would enjoy wearing – so that’s what I did.”

Self-taught by using Vogue patterns to sew her own clothing, Merrill originally began taking fashion classes at Mesa so that she could create and design patterns to fit her own body. Working with teachers like Lazear has encouraged her to possibly pursue a career in designing and sewing clothes.

“These classes have inspired me – I’ve been working on some designs that incorporate fiber-optics and LEDs – so I think I might want to turn it into some sort of a business because I like the idea of being able to construct my own designs,” Merrill said. 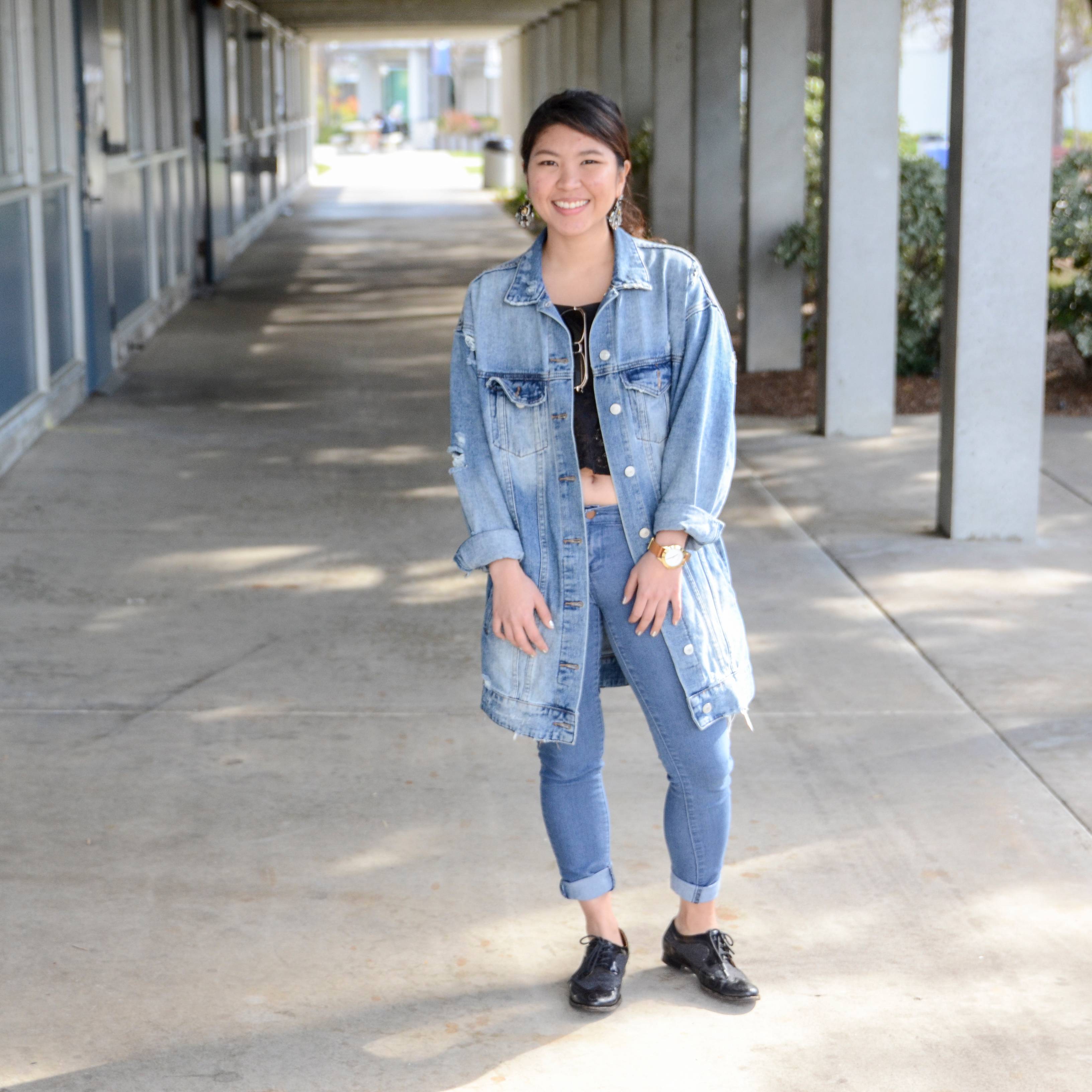 Fashion Design major Phitsinee “Fern” Jirathamrongkarn – an international student from Thailand – hopes to work in New York City as a fashion intern after graduating from Mesa College and before returning to Thailand.

Jirathamrongkarn also created a modern spin on the red skirt suit by transforming it into a jumpsuit with a long train. The outfit could just as easily be spotted at a night club in the 2000s as it can be imagined in its more conservative, 50s form.

“In the past, a woman would wear skirts to show that they’re a woman, but now in the modern day, women wear skirts and pants, so I decided to design pants to make it different from the past,” Jirathamrongkarn said of her design choice. 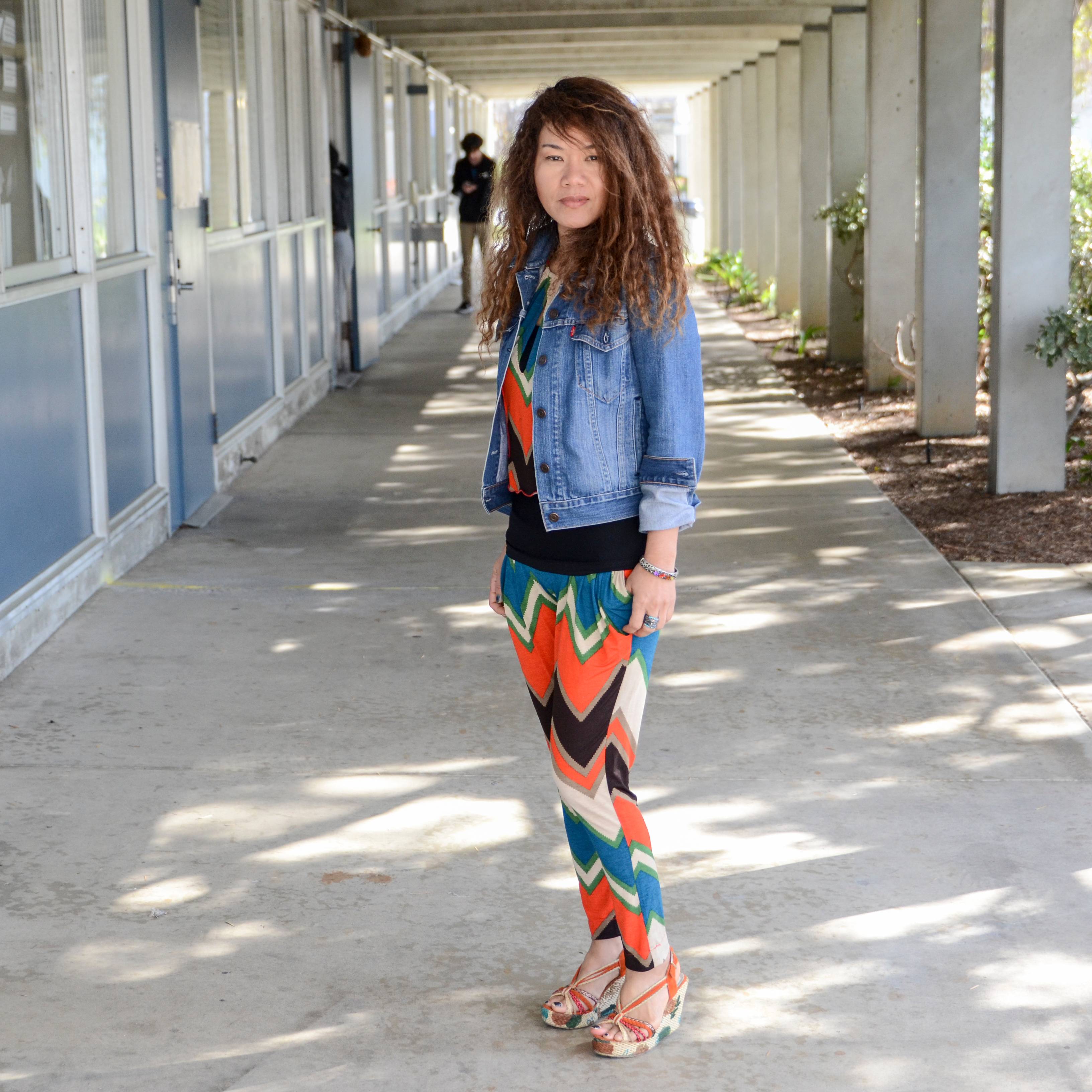 Burmese refugee Ma “Juliet” Liet – another Fashion Design major at Mesa College – created a new twist on a brown suit displayed at the SDHC. Hand stitching chevron stripes into brown wool, Liet said that the touch helped her to challenge herself with a design that would normally only take a day or two to complete.

After graduation, Liet hopes to open a boutique in San Diego or Los Angeles, eventually returning to Burma to teach classes to people like her sister and cousin who still live there.

“People are very interested in learning how to sew – and they know a little bit – so I want to open a training program there,” Liet said. 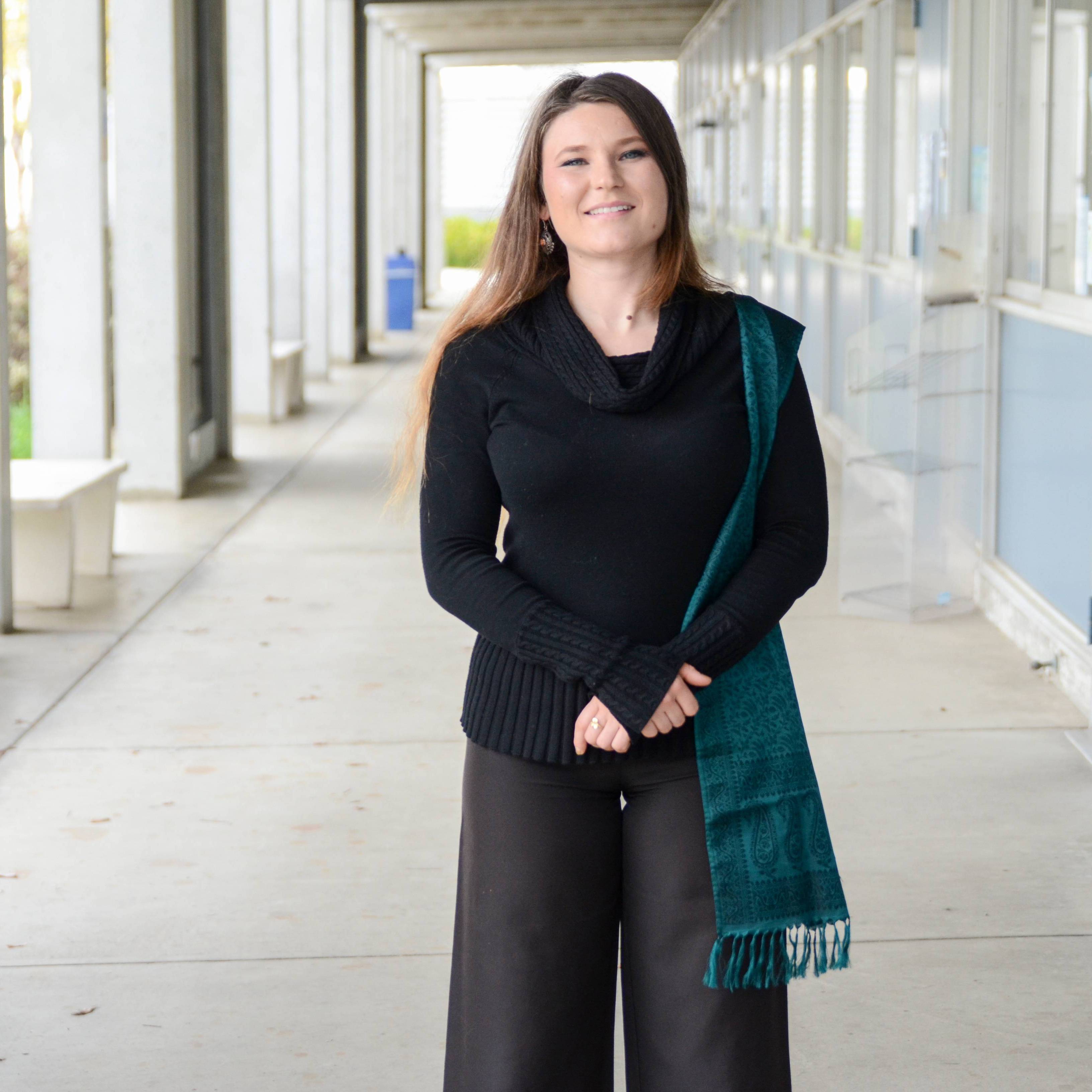 By using couture designer Shingo Sato’s transformational reconstruction method to break up the lines in her dress’ pattern, Riekstins was able to create a “cracked glass” look by “bending” her pattern.

“It was very challenging using the transformational reconstruction technique because you literally do not know what your garment will look like until you’ve sewn the last seam,” Riekstins said.