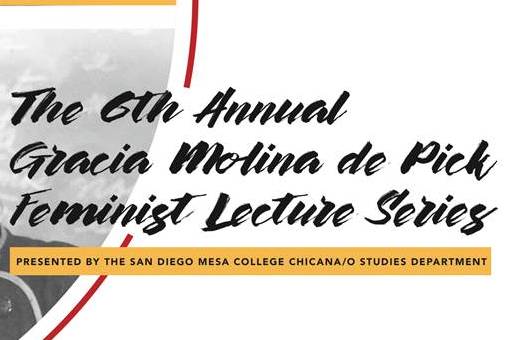 On Wednesday, March 8, 2017 at 11:00am in Mesa Commons Room 211, featured speaker Dr. Maria Nieto Senour, Ph.D., President of the San Diego Community College District Board of Trustees will discuss the importance of centering community, culture and social justice in education.

On Wednesday, March 22, from 12:45 to 2:10 p.m. LRC-435, filmmaker Richard Saiz will screen, “My Journey with Gracia” followed by a discussion. Richard Saiz has more than 45 years of experience as a broadcast journalist and documentary producer.

For more than 60 years, Gracia Molina Enriquez de Pick was an educator, feminist, mentor of students and community activist for equality, justice, and respect for women, indigenous communities, working people, and immigrants. As an early champion for bi-lingual education, Molina de Pick helped to develop an academic program at Mesa College that established one of the first Chicano Studies Departments in the nation. In March, 2013, Molina de Pick gifted $80,000 to Mesa College for the creation of an endowment supporting the Mesa College Chicana/o Studies Department -- which she helped to found in 1970. It is believed to be the largest donation of its kind awarded to support a Chicana/o Studies program at a community college. Mesa College proudly displays the Gracia Molina de Pick Glass Gallery in her honor.