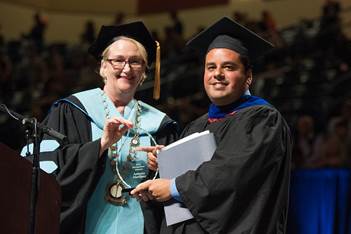 San Diego, Calif. —San Diego Mesa College is accepting nominations for the 2019 San Diego Mesa College Distinguished Alumni Award.  The Alumni Award program was established in 2011 to recognize former students who have made significant contributions to society, and whose accomplishments, affiliations, and careers have honored the legacy of academic excellence and equity at San Diego Mesa College.  The award recipient will be announced in March and invited to be the guest speaker at Mesa College’s 2019 Commencement Ceremony scheduled for Saturday, May 18. Nominations are due no later than February 22, 2019. Anyone in the greater community is encouraged to submit a nomination.
“We are proud of the tens of thousands of students who have attended Mesa College, and of the contributions they have made to the city, the people of San Diego and beyond,” said Dr. Pamela T. Luster, President of Mesa College. “I encourage the community to respond, and help us to select our 2019 Distinguished Alumni Award recipient.”
The 2018 Distinguished Alumni Award recipient and Commencement speaker was Antonio Martinez. Mr. Martinez grew up in the San Ysidro and was the first in his family to go to college. While a student at Mesa College, he studied philosophy, politics and economics. He graduated from Mesa College in 2005, and transferred to the University of Pennsylvania, where he graduated with honors, with a degree in philosophy and economics. 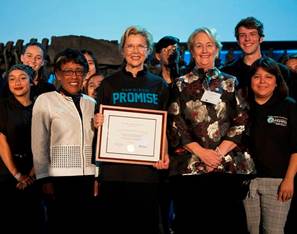