When he was in graduate school studying literature and working on his dissertation on LGBTQ+ comics from Spain, he came across something he found both personally and professionally interesting: academics who were beginning to study superhero comics and films as representative figures of a variety of aspects of American culture. After graduate school, Michael met political scientist Annika Hagley when they both started teaching together and soon discovered a mutual interest in the shift of how comic book heroes were being portrayed in post 9/11 America.

According to Harrison, this project was born of two general education classes in which the superhero served as the window into several critical fields of inquiry such as race, feminism, nationalism, queer theory, assimilation, ethics, philosophy of good and evil, identity and conflict and as a means of teaching critical theory: often a complex and daunting task to tackle at the undergraduate level.

In 2014, Harrison and Hagley wrote an article 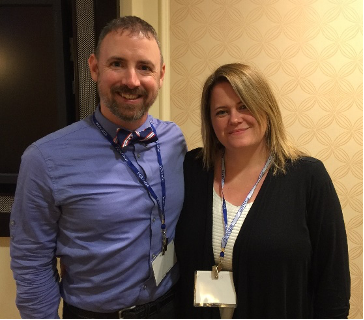 on the Avengers that was published in PS: The Journal of Political Science and Politics.  Shortly thereafter, several major political science blogs and websites asked them to contribute pieces, including the United States Center on American Politics and Policy.

In that blog, they focused on The Avengers, and they write that each character in the multi-billion-dollar film franchise represents a distinct identity or behavior with which the United States has been struggling to reconcile itself, while collectively the film series represents the reactions of a nation to a direct, domestic attack.  The Journal article, blogs and subsequent conference presentations served as the inspiration for the book.

“In this book, we position post 9/11 superheroes as an analytical framework through which to view important questions of government authority, patriotism, war, morals, race, gender, marginalized identities, surveillance, the military industrial complex, and American political and social identities formed over time in response to the terrorist attacks,” states Harrison. “We find that post 9/11 superheroes were, at first, resurrected to appeal to the dominant rhetoric of war and retribution but, as space was created between the immediacy of the attacks and the American pop culture machine, the superhero genre was one of the few areas in which a more radical and introspective examination of American life was given room to breathe.”

Harrison and Hagley believed that the nation’s obsessive retelling of 9/11 both at the individual level and the level of mass consciousness speaks to an interest in the day itself and the aftermath which will perhaps, never be satisfied.  By taking a recognized cultural trope (superheroes) and using it to discuss serious questions about America, both as it healed from the immediacy of the attacks and in the long term aftermath, they are presenting an argument that would be engaging to anybody who is interested in psychology, the media, superheroes in general, politics and the importance of storytelling and myth in society.

In exploring topics such as gender, race, and LGBTQ identity through the lens of superhero films among other topics, Harrison and Hagley hope to provide a means for individuals to better understand themselves and their place in 21st century society, as well as understand the myriad of issues that impact their family, friends, neighbors and others who might belong a group or groups distinct from their own.

Find Reborn of Crisis: 9/11 and the Resurgent Superhero.