A Dreamer That Never Gave Up, Natchel Bello Luna to Graduate from Mesa this May 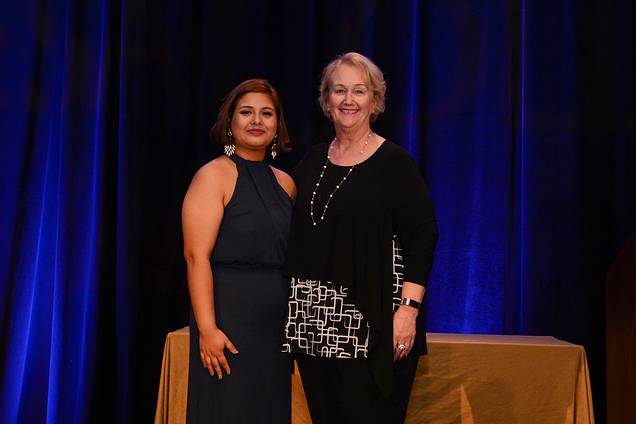 Natchel Bello Luna is the Lead Peer Navigator for Mesa’s CRUISE Program, and recently received the California State Assembly’s 80th District 2018 Woman of the Year award in March, and has continued on a path of success towards graduating from San Diego Mesa College on May 19, 2018. Ms. Bello is a Business major at Mesa with an emphasis in Marketing and holds a cumulative GPA of 3.54. She was awarded this honor due to her “exemplary leadership, service, and tenacity” in her community and school.

Amongst this award, Ms. Bello has earned many more in the recent years during her journey at Mesa and has led by example – many students have received the benefit of working with, or studying under her and the students, Ms. Bello, and the Mesa community are all the better for it.

Her service and passion for improving conditions for at risk or undocumented students at Mesa speaks for itself through her activities as Co-President of Mesa’s RISE Club and as a Lead Peer Navigator for Mesa’s CRUISE program. Her efforts off campus should not go unnoticed either, as she has worked hard to establish herself as an activist and round the clock supporter of students and dreamers alike.

Having grown up in San Diego, she is a City Heights community member, who has experienced first-hand the struggles of a first generation, low income, DACA student, and continues to support the Clean Dream Act and work tirelessly towards encouraging others to show the same support. Whether it’s on campus, in the San Diego community, Las Vegas, or even Washington D.C. – where she has advocated with the national organization “United We Dream” – Ms. Bello leads by example and sets the tone for the vision that students who face adversity can achieve success just as she has.

Additional awards that Ms. Bello has received include the AHSIE Seed to Tree Scholarship 2018, the Chancellor’s Scholarship 2017, and the Certificate of Leadership for organizing “A Week in Our Shoes” – an event that was presented by the RISE Club and Borderless Scholars at Mesa to highlight the immigration and education struggles that undocumented students face. At the 25th Annual Scholarship Awards, Ms. Bello received three scholarships: the Chicana/o Studies Department Richard and Gracia Molina De Pick Scholarship, the Sin Fronteras Scholarship and the honorable President’s Academic Excellence and Service Scholarship. Now she is off to new adventures and will be transferring to San Diego State University in the fall.