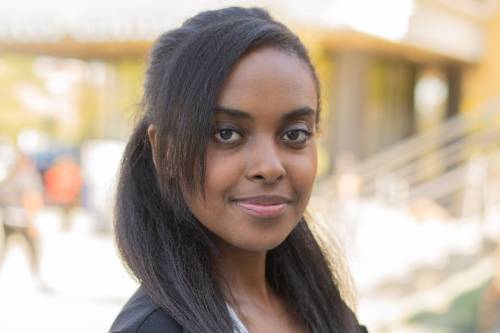 On January 23, 2020, San Diego Mesa College student Hanan Dirirsa was announced as a semifinalist for the selective Jack Kent Cooke Undergraduate Transfer Scholarship, the nation’s largest private scholarship for transfer students. The scholarship supports select high-achieving community college students with up to $40,000 annually for a maximum of three years as they complete their bachelor’s degree at a four-year university or college.

This year, Dirirsa is one of 456 semifinalists, chosen from a pool of 1,500 community college students from 311 community colleges across the nation. A Human Biology major and STEM Mentor in Mesa College’s STEM Peer Mentoring program, she has been an active leader on-campus, supporting other students’ success in her mentor position and in her involvement with the Women in Science Club. Dirirsa is also an AS Student Senator and serves as a student representative on the Mesa College Foundation Board. She is on track to transfer this fall and hopes to pursue a career in oral and maxillofacial surgery.

Several of Mesa College’s students have been selected as semifinalists in previous years including Sofia Staedler in 2019 and Restileon Asuncion, Daria Zavyalova, and Cole McDaniel in 2017.

Last year, 61 students were awarded the Cooke Undergraduate Transfer Scholarship. In addition to the monetary prize, the winners received educational advising, opportunities for internships, study abroad, and graduate school funding. This year’s recipients will be notified of their success later this spring.

Since 2000, the Jack Kent Cooke Foundation has provided support services and educational advising to more than 2,600 students, and has awarded over $200 million in scholarships. To learn more about the ways the Jack Kent Cooke Foundation is advancing students’ education, and to see if you qualify for a scholarship, visit their website at jkcf.org.