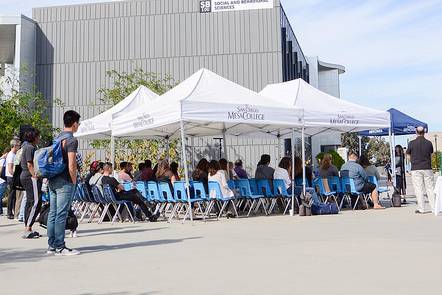 In a joint effort, faculty, students, and staff at San Diego Mesa College hosted the Second Annual Teach-in, with the topic of Free Speech vs. Hate Speech. The Teach-In was on Nov. 14 at the Mesa Commons Promenade, with about 40 students and faculty in attendance. Last fall was the first time that Mesa hosted a Teach-In event and each one has focused on a different discussion topic.

Although according to organizers, the turnout of the Teach-In was less impressive compared to last year, Professor Rob Fremland stated, “I thought it was good and the talks were great! There were some perspectives I had not thought of. So, at least I learned a lot.”

The speakers included a selection of distinguished professors who spoke for 10 minutes each on a variety of topics relative to Free Speech vs Hate Speech. Students were encouraged to comment and provide thoughts after each speaker was finished.

President of Mesa College Pam Luster said, “At this college you have the opportunity to exercise your free speech.”

Professor James Stout shared his perspective about how sports are a type of platform for speech, whether it’s hate speech or free speech. Assistant Professor Pegah Motaleb also gave a speech called, “Before You Hit Like,” which pertained to concerns about bullying and cyberbullying. Professor Sabrina Santiago presented how hate speech is a part of free speech. English Professor Nancee Kesinger commented, “No one gets to define patriotism for you.”

This event was sponsored by the Academic Senate, Classified Staff Senate, Associated Students, and Student Success and Equity.